What old sci-fi film is the source of this Hotels.com ad clip featuring a spaceship blowing up Earth?

Youtube continues giving me ads for Hotels.com, and now I've seen a slightly different ad with another brief clip that looks like it must be from an old sci-fi film: 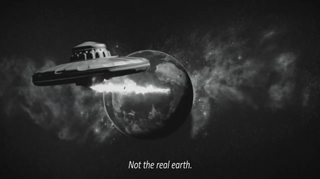 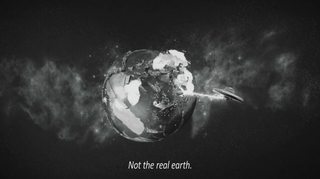 A saucer-shaped spaceship does a drive-by shooting of the planet Earth, which proceeds to explode in chunks. The quality of the clip is only slightly better than the fire-breathing monster in my previous question. Probably the text "Not the real earth" was added for the ad, so it doesn't help in searching.

I managed to find the ad as its own video here, so you can see the clip in its entirety as well as my screenshots above. The comments aren't any use, as they just talk about Marti Belle.

What film or TV show does this come from? (If any. But I'm more confident this time that it does come from something, after WolfieSmith's success on my previous question.)

Unfortunately, Buzz is correct, this is indeed stock footage.

You can find the original, full colour clip on shutterstock. It is listed as created by a company called CFH Design, who are based in Brazil.

I'm going to say pretty confidently that it is not from a real film (from the golden age of science fiction), because it contains elements that cannot plausibly have been created at the same time.

The flying saucer has an absurdly retro Art Deco look to it, which probably would have looked dated rather than futuristic by the time of the first reported "flying saucer" sighting in 1947. It is basically inconceivable that a science fiction film would be using a design like that in the late 1960s or after. The creators of the commercial presumably selected the Deco styling on purpose—not because it conveyed any specific period of science fiction, but simply because of its retro, raygun Gothic esthetic.

In contrast to ship, the image of the Earth (before it is destroyed) cannot have been created before 1967 at the earliest. (The explosion also does not look like anything I have ever seen in a 1960s or earlier film, but that's trickier to quantify.) That kind of imagery of the planet's surface (you can see the Etosha pan, a system of salt flats in northern Namibia, for example) was not available until 1967. The first terrain images approaching the level of detail shown were taken by the ATS-3 satellite, launched in November of that year. 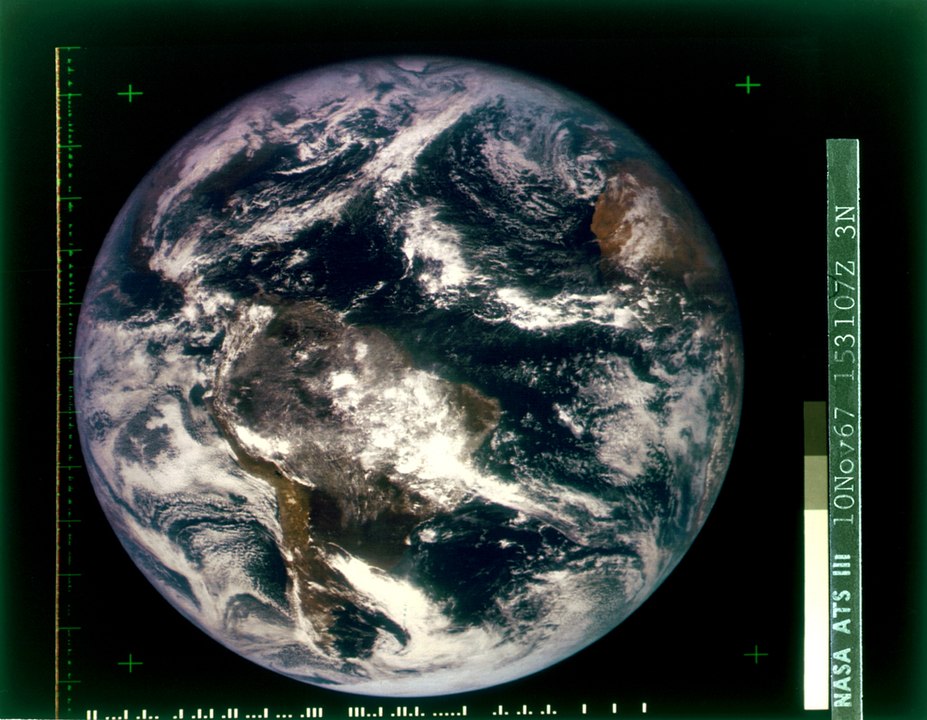 (ATS-3 was in a geostationary orbit over the Western Hemisphere, so it could not itself have taken that kind of image including of Africa, but similar views of the whole globe quickly became available as more satellites, from the ATS series on onward, were launched.)

In light of these temporal incongruities, I conclude that the shot of the aliens destroying the Earth is not from an actually classic science fiction film, but is an entirely modern creation.

25
What old sci-fi film is the source of this Hotels.com ad clip featuring a fire-breathing monster?

3
Sci-fi film: peace ritual interrupted by a spaceship
4
80s era Sci-Fi/Horror film featuring several unrelated stories (not Creepshow)
19
Sci-fi movie — abandoned spaceship returns to Earth
5
Floating transparent sphere beaming something into a crater? (Space Force! theme song video)
25
What old sci-fi film is the source of this Hotels.com ad clip featuring a fire-breathing monster?
3
What character is this on the back of Reese's Puffs?
5
Which source book does this page (featuring the outline of a terminator anatomy) come from?