Is the language of the TVA, He Who Remains, and all of the printed material in these places in English or Allspeak?

Many years ago, I learned about Allspeak and how the Asgardians used Allspeak which was basically like a magical way that no matter how they spoke, it was translated into the vernacular of the person hearing them. I've always just assumed this was the case for any advanced civilization in the MCU, whether it was by magic or technology.

The TVA, however, is a bit odd. They have a lot of printed material which is obviously printed in English, and so did He Who Remains when he was demonstrating he knew what was happening up until that point.

Do we assume that this is allspeak, or is it English for some reason? Or is this the kind of thing we're not supposed to ask questions about?

I don't think Allspeak exists within the MCU, or at least, I don't see any clear evidence that it does. In Avengers: Infinity War, Thor mentioned that Groot (the language) was taught as an elective on Asgard.

THOR: Yes, they taught it on Asgard. It was an elective.

This suggests that he took classes in it, as a normal human might take classes in French or German. Whereas in the comics, the Allspeak works like the Universal Translator in Star Trek, where you just speak in your own language, and are heard by the person or people you're speaking to in theirs.

KID LOKI: What language are you speaking? You're not speaking French.

THOR: Neither are you. Are you?

THOR: You speak with the All-Tongue. Every man hears it as his native language. 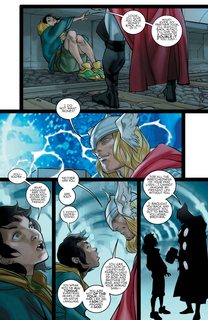 Also, in Loki Episode 1, Loki speaks in English to some Mongolians in the Gobi Desert, and they seemingly don't understand a word he's saying. He does speak Latin to people in Pompeii in Episode 2, but the very fact that we hear him vocalising his words in a different language -- rather than having his words magically translated, irrespective of what language he was speaking in -- again contradicts how the Allspeak is said to work in the comics.

The most logical conclusion to be drawn from the above evidence is that in the MCU, Asgardians have to take classes to learn other languages, and that they probably don't get around to learning all languages, such as Mongolian in Loki's case.

I see no reason to think it's any different within the TVA. In the scene in the church in Episode 1, Mobius is shown to speak French, and one of the Hunters states that he can speak every language on the timeline, implying that all TVA staff likely can.

MOBIUS [in French]: I'm sorry... my friend is an imbecile.

HUNTER U-92 [in French]: I speak every language on the timeline too. Jackass.

But there's nothing preventing them from just learning all these languages. Mobius states that time passes differently within the TVA, and He Who Remains said more or less the same thing about the Citadel at the End of Time. So for all we know, these people are hundreds, thousands, perhaps even millions of years old, meaning they have plenty of time to learn as many languages as they want.

And again, the fact that we hear them vocally switching between different languages contradicts the way the Allspeak is said to work in the comics.

One other thing to note is that pretty much all the TVA staff we've seen -- including He Who Remains -- are seemingly human, and moreover American, if their accents are any indication. So while they may be capable of speaking any language on the timeline, their first language would presumably be English, and it therefore makes sense that they'd communicate with one another in English most of the time.

He Who Remains tells the Lokis: "Eons ago, before the TVA, a variant of myself lived on Earth in the 31st century." Therefore, it is quite plausible that the speech and text are English because that is the language He Who Remains used on Earth. It's a simple case of He Who Remains making the TVA use what he was comfortable with.

Not the answer you're looking for? Browse other questions tagged marvel marvel-cinematic-universe languages loki-2021 or ask your own question.

29
Is everyone in Guardians of the Galaxy speaking English?
7
Do all characters have a universal translator?

10
Who are all these Avengers?
23
Which originally non-English novel or story has had the widest reception in English-language SF as measured in number of citations?
13
When was Thor first portrayed as an advanced alien, not a god?
4
If C-3PO can speak “Binary” (aka: droidspeak) then why don’t we ever hear him speaking in bloops and bleeps like R2-D2 and other droids in the movies?
32
Who are all these characters Squirrel Girl has beaten?
16
Who are all these superheros in Avengers: Endgame poster?
11
Who truly is the character behind the TVA?
5
How does killing He Who Remains in the future change the past?
12
Why did the TVA arrest variants at all, instead of resetting them?