What X-Men comic features Storm being attacked by a group of drug addicts in a housing project, and is saved by Luke Cage and Misty Knight?

I don't remember the entire storyline from the issue, but I do have pretty good details on the scene I'm trying to remember.

Storm is in Harlem, I believe, and she's wandered in to a housing project. I can't remember exactly why, just that she does so. She comes upon a room filled with teens and early 20-somethings who are all strung out on drugs. The leader of the pack becomes very aggressive with her, and after she tries to explain herself, he slashes her hand with a knife he had been concealing. I recall Storm shouting "MY HAND!!!" and in the next frame saying something about the blade cutting her to the bone.

To defend herself, she conjures up a wind storm inside the room, tossing the attacking addicts about. She thinks to herself something about not wanting to hurt them, as they were just children (even if they were dangerous)" She's so involved in thought, she doesn't notice the creep who slashed her hand is now creeping up behind her and intent on plunging the knife in her back.

A yellow-sleeved arm shoots out from behind the knife-wielding guy, grabbing him by the wrist along with the words "Uh-UH, punk." It's Luke Cage and he slams the other guy into a nearby wall.

It turns out Cage and Misty Knight had gotten word that an unusual woman had been seen uptown, and they figured it was her. Storm, not being as streetwise as the others, asks how these kids could have gotten this way, and why isn't something done about it? Cage responds with something along the lines of these kids having no hope, no future, and the politicians just want to ignore it. Something like that.

I'd guess this particular issue came out in the late 70s to very early 1980s. It might have been part of a greater storyline where the X-Men were looking for young mutants who were in trouble or something, but I can't say for sure.

Entering an old apartment building where her parents used to live, Storm is surprised to find that it is now an abandoned tenement and a junkie shooting gallery. When the junkies squatting there assault her, she uses her weather powers to fight back. One of them sneaks behind her and is ready to stab her but is subdued by Luke Cage, who is accompanied by Misty Knight. 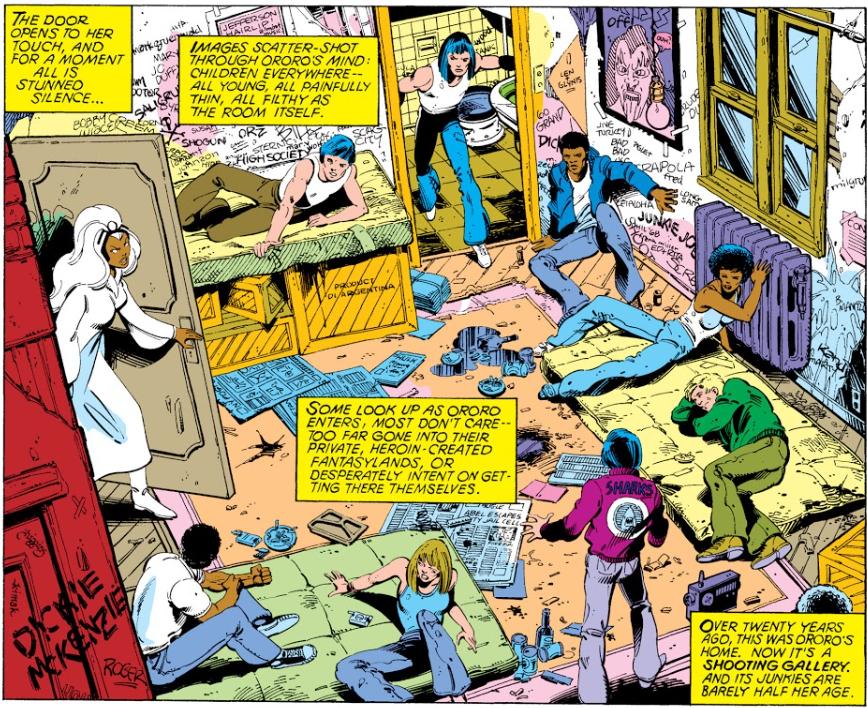 Storm is cut "to the bone" 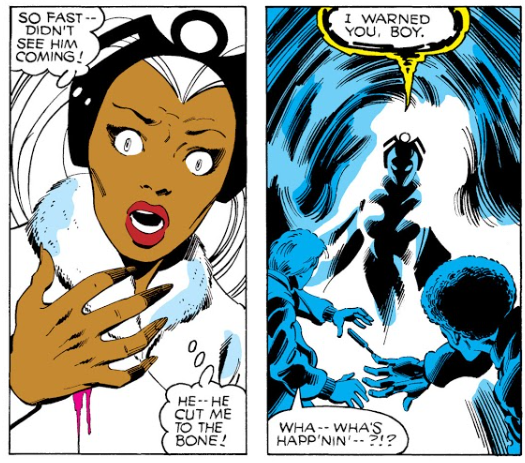 Luke Cage turns up and beats up some punk 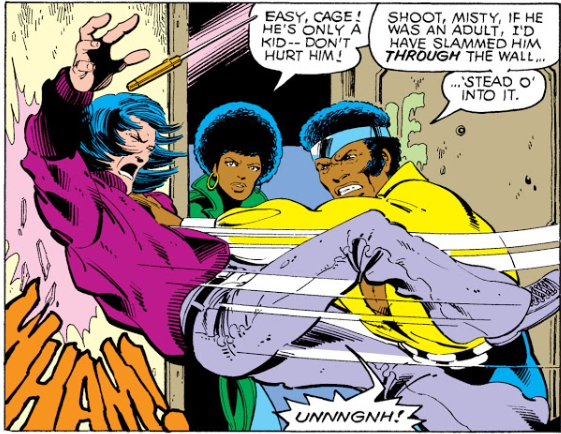 Not the answer you're looking for? Browse other questions tagged story-identification marvel comics x-men or ask your own question.

8
X-Men: Why didn't Psylocke notice Jubilee's presence in the Australian outback?
7
Old X-Men comic where team travels to alien world with a ring-like sun that needs recharging?
8
Comic book about guys with powers that are hunted by society
6
Film about ancient hypnotist magician who uses hypnosis to control people around him
10
Science fiction book series about aliens that look exactly like humans, protagonist tries to rescue her brother from a government camp ran by aliens
11
80s/90s fantasy book: female protagonist, demon-related magic, "knife"/"blade" in title...?
6
Young Adult Fantasy book where some people, like the female protagonist with super strength, are called a special name with their special powers
7
Indian kids fantasy show incorporating main actor recasting as plot point