Looking to find a cartoon TV Show, maybe from the '90s, about alternative realities

I remember the main protagonist was a young boy who wore a red hat and he could travel between alternative dimensions.

The series follows Max, an adventurous teenage boy who receives in the mail a small statue of a fowl, inscribed with Egyptian hieroglyphs whereof the translation states: "You have been chosen to be the cap-bearer. Go to the mini-mart and wait for a sign, Mighty Max". Shocked by the message, Max drops the statue, shattering it and revealing a red baseball cap emblazoned with a yellow "M", which he dons. The cap is capable of projecting wormhole-like "portals" through which Max can teleport across space and time.

Upon arriving at the mini-mart, Max is chased by a lava-monster sent by antagonist 'Skullmaster'. As Max flees, the cap teleports them to the Mongolian desert, where he befriends Virgil, a nearly omniscient Lemurian whose appearance is that of an anthropomorphic "fowl" (a running gag in the series is that Max refers to Virgil as a "chicken" to which the Lemurian replies "Fowl, actually"), who explains that Max's reception of the cap was prophesied c. 3000 B.C. Thereafter Max, Virgil, and Norman, his Viking bodyguard, travel together around the world, defending Earth against the minions of Skullmaster, who is responsible for the downfall of the Lemurians and the people of Atlantis. Norman is supposedly immortal and identified as or with Sir Lancelot, Thor, Samson, and Hercules. Most plot-driving episodes involve Skullmaster or one of his monstrous followers; but in many episodes, Max is required to stop an independent villain. While all episodes involve travel across Earth, one involves time travel, and the portal can even extend into the astral plane (as seen in the episode "Souls of Talon"). 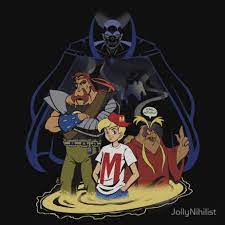 Max (Rob Paulsen), a twelve-year-old boy, finds a magical cap that can teleport him across dimensions.

The artwork depicts him as wearing a red baseball cap with a big yellow M at a very 90's angle.

Not the answer you're looking for? Browse other questions tagged story-identification tv cartoon parallel-universe or ask your own question.

9
Looking for title of TV series about boy and an alternative world
3
Unknown VHS sci-fi western-style cartoon movie from the 80s/90s
10
Children's book from the 90s early 00s about kids discovering a parallel town. Green book cover
3
Looking for a cartoon (or perhaps anime) from the 1980's which aired in Europe (maybe elsewhere)
6
Help me identify a 90s/00s live action tv show, space travel, golden object, maybe a saturday morning show?
7
Cartoon TV Show About Three Kids and Monsters and a "veil" between realms
6
Looking for an old anime or cartoon show of a family who can transform into green monsters