What is the Federation representative smoking?

In Star Trek V: The Final Frontier, the Federation representative on Nimbus III, St. John Talbot, appears to be smoking something. 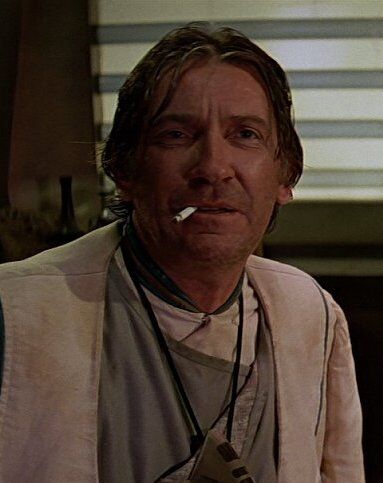 The Memory Alpha article I linked above seems to indicate that this character was intended to be portrayed sort of as a loser (in retrospect, I imagine him as what John Belushi would have looked like if he had made it past age 35), so it makes sense that he has some bad habits, but is it ever explained exactly what he is smoking in-universe? Is it tobacco? marijuana? Andorian gray weed? ethereal love flowers of Varlax 9? My original impression of watching this as a child was that he was simply smoking a regular tobacco cigarette, but that struck me as odd since smoking was just not something you saw in Star Trek media. I also note that tobacco is rarely mentioned anywhere else in Star Trek, and when it is mentioned in DS9's Little Green Men, it is treated as something thoroughly antiquated and possibly banned.

Yes, from an out-of-universe perspective, it is almost certain that the actor here is smoking a regular cigarette that was purchased from the shop around the corner to the studio. I'm asking whether there is an in-universe explanation for what he is smoking.

Browse other questions tagged star-trek the-final-frontier drug or ask your own question.

34
Why did Q choose Picard and the Enterprise?
21
Isn’t the Enterprise a no-smoking ship?
5
Did Sybok have any means of preventing a ship from beaming out the hostages on Nimbus III?
10
Were the horses in The Final Frontier an Earth breed?
4
In what story, a short novel, does the dream snake appear?
4
What is the penalty for unlawful possession of Romulan Ale in the Federation?
16
What kind of creature was the "God" in Star Trek V: The Final Frontier?
9
Why is the Federation Presidency headquartered in Paris, Earth?
11
Did the Federation Ever Revisit the Central Barrier Planet?
10
Are clinical trials done in the Star Trek universe?