Note: This lore comes from Pokémon Go but I'm asking the question here instead of Arqade Stack Exchange because I specifically want to know about the lore.

This says that the Shadow Effect that team Rocket puts on Pokémon makes them more powerful:

But once you free a Pokémon from team Rocket, you can purify them. According to this description, purifying the Pokémon makes it more powerful too: 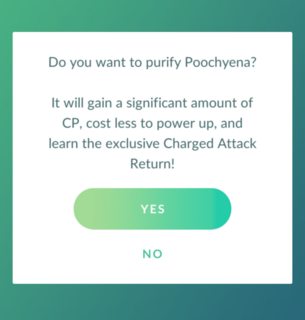 This seems like a contradiction because purifying seems to imply that you're returning Pokémon to the way that they used to be.

Unless a Pokémon is ultimately better off after being turned into a Shadow version and then purified than if simply nothing had been done to it (which would be a counter-productive narrative since then we should actively try to turn Pokémon into Shadow versions so that we can purify them).

Shadow Pokémon originate from Pokémon Colosseum and Pokémon XD: Gale of Darkness, where they are described as Pokémon that have had their emotions removed or inhibited through scientific means. This process doesn't inherently make them stronger, but it does make them more aggressive.

Pokémon fights are generally treated as being friendly, playful affairs, with the Pokémon holding back their true strengths so as to avoid injuring each other or causing huge collateral damage. Shadow Pokémon (and other Pokémon with inhibited emotions, such as the clones in Pokémon: The First Movie) do not hold back in the same way. So their power level is the same as a regular Pokémon, but they are willing to use more of that power, if that makes sense.

Purifying a Shadow Pokémon in GO erases that power boost, but slightly raises the Pokémon's IVs and substantially raises its level. I'm unsure of the lore reasons behind this. Whether the IV boost is better or worse than the attack boost - i.e., whether a Pokémon is stronger or weaker after it's been Purified - is a matter of opinion.

16
Who are the Pokémon on the decoration in the Viridian City Pokémon Center?
21
When Pokémon hatch from their egg, are they full size?
15
Why are there no Dark type Pokémon Gym Leaders?
10
Why can Pokémon learn moves that are outside their type?
16
Are there more than one of each Legendary Pokémon in the anime universe?
9
Are the Pokémon anime generations continuations or retcons
12
Are Pokémon animals?
4
Are Pokémon depicted dying in a fight?
1
Are any furies based on specific Pokémon?