What, of the planets he consumes, provides Galactus with sustenance?

Galactus is pretty big on the world eating. It's more or less his thing. It's well known that he has an insatiable hunger that he must obey, and when he gets peckish he just chows down on a world that is capable of sustaining intelligent life.

But when he does so, what is it he digests, or processes to sate his hunger? Is it the action of eating itself? The physical matter? Souls? Minds? Twinkies?

I have a hunch it's sentience (lit. minds) but I can't find any evidence of this anywhere.

In at least one universe (Earth X/Earth-9997), he's eating the eggs of the Celestials:

In the alternate universe limited series Earth X, the Celestials are beings of energy encased in armor composed of vibranium, a metal with properties that prevent their dissipation. They reproduce by planting a fragment of their essence in a planet, which matures into a new Celestial over the course of eons. The cosmic entity Galactus is an enemy of the Celestials, as the character devours planets that incubate Celestial "eggs" to prevent the Celestials from overpopulating the universe. (Wikipedia's Reference: Earth X #0 (March 1999); #0.5 (Jan. 2000); #1-10 (April 1999 - Jan. 2000); #11-12 (March-April 2000); #13 (June 2000))

There's more information over on the Marvel Wikia for Celestials. A brief excerpt:

The Celestials would soon over populate their home universe causing it's collapse and the event that would lead to it's own creation. This event would lead to the birth of Galactus, who unknown to most but the most cosmically aware was actually an equalizer to insure that the Celestials would never overpopulate the universe again by feeding on some of the planets they impregnate.

In the prime universe (Earth-616), the Marvel wikia has this to say about Galactus (basically leaving it a generic "energy"):

However, as ages passed, the intervals between feedings decreased considerably in length, and Galactus found himself needing to consume worlds inhabited by sentient races if he could find no other worlds possessing the energy he needs in time to sustain himself.

More recently, Galactus' appetite became such that he would only devour the life forces of sentient beings and leave the planets on which they lived intact. He began to consume more and more frequently, because unlike the life essences of the planets he normally feeds on the life forces of mortal beings offer him no sustenance; thus his addiction left him perpetually starving, weakened and demented.

Cosmic Hunger: Galactus requires unknown energies obtainable only from a certain type of planets in order to sustain his life. The suitable type of planet need not to be one where life is present, but it must have the potential to support life.

So at the very least, it's not "sentience" that Galactus feeds on, since he can feed on worlds without any life currently on them.

There is no canon answer as to what specific type of energy Galactus is feeding upon when a world is selected by a Herald. Depending on the writer, the medium or the continuum being described, Galactus has used a variety of energy forms to survive on from nebulous and ill-defined "life-force energies" to the anti-matter energy of the Negative Zone or the background energy of the universe itself (perhaps vacuum energy), which may be just another way to describe the Power Cosmic.

Here's what we do know:

Even at his earliest stages, he was a power almost without equal. Discovered by one of the first most advanced races in the universe, a Watcher is horrified to discover how powerful Galactus was. 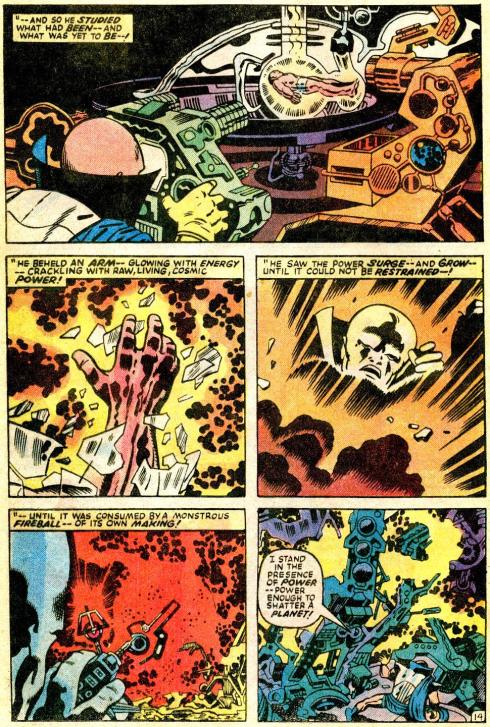 The Watcher after studying Galactus flees when he, as was the want of his people refused to destroy the potential threat he correctly perceives Galactus to eventually become. As Galactus leaves his incubation chamber, he consumes his first planet without technology leaving it a husk unable to support life, forcing its inhabitants to become the first Wanderers (beings forced from their world by Galactus). 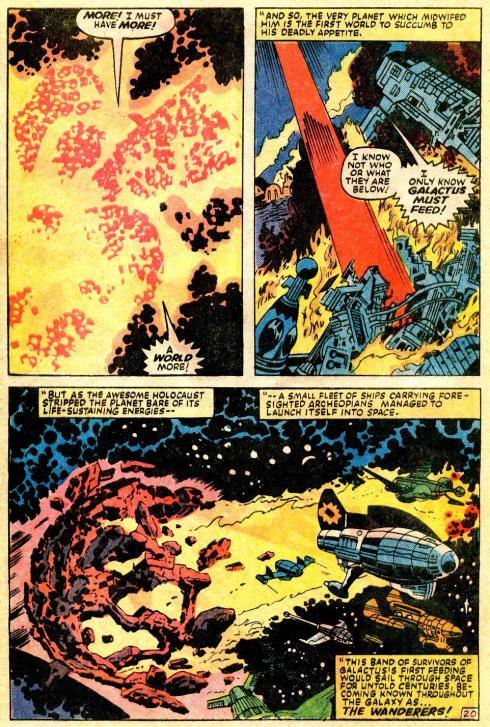 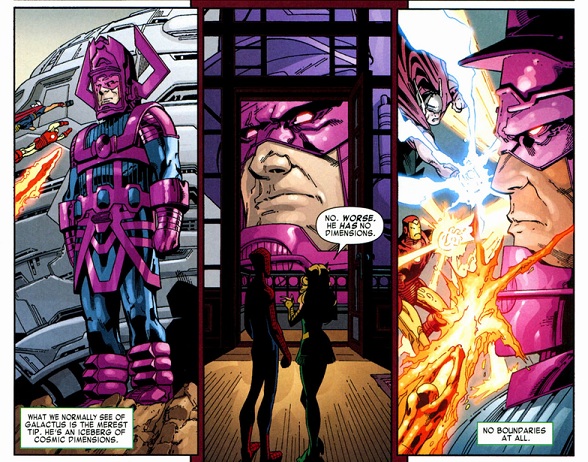 Taa's civilization was one of the last still in existence. Lethal radiation caused by the "Big Crunch" this universe was experiencing was wiping out all life across the universe. Galan, a space explorer, was dispatched to travel through the cosmos to find a means of saving Taa, but he found none. The radiation eventually killed off all but a tiny fraction of the population of Taa. Knowing their deaths were inevitable, Galan proposed to the remaining survivors that they die gloriously by piloting one of their starships directly into the heart of the "Cosmic Egg." As the starship containing Galan and his fellow survivors approached the focal point of the Big Crunch, the heat and radiation killed all the passengers except Galan, who strangely found himself filled with new energy. 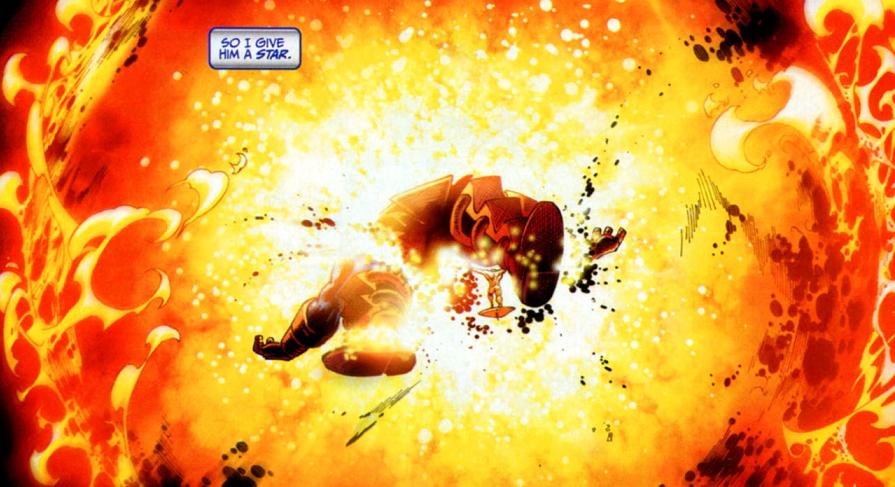 Galactus is now thought to be a Herald of Franklin Richards (this is implied from a statement from Nathaniel Richards, Reed Richard's father) after a confrontation with the Mad Celestials in which Galactus appears to be defeated and potentially mortally wounded. He is resurrected and restored with the powers of Franklin Richards. Whether this is hyperbole or a statement of fact remains to be determined. It is also noted Franklin and Galactus will be aware of each other for billions of years in the future. Stand by for your moment of awesome: 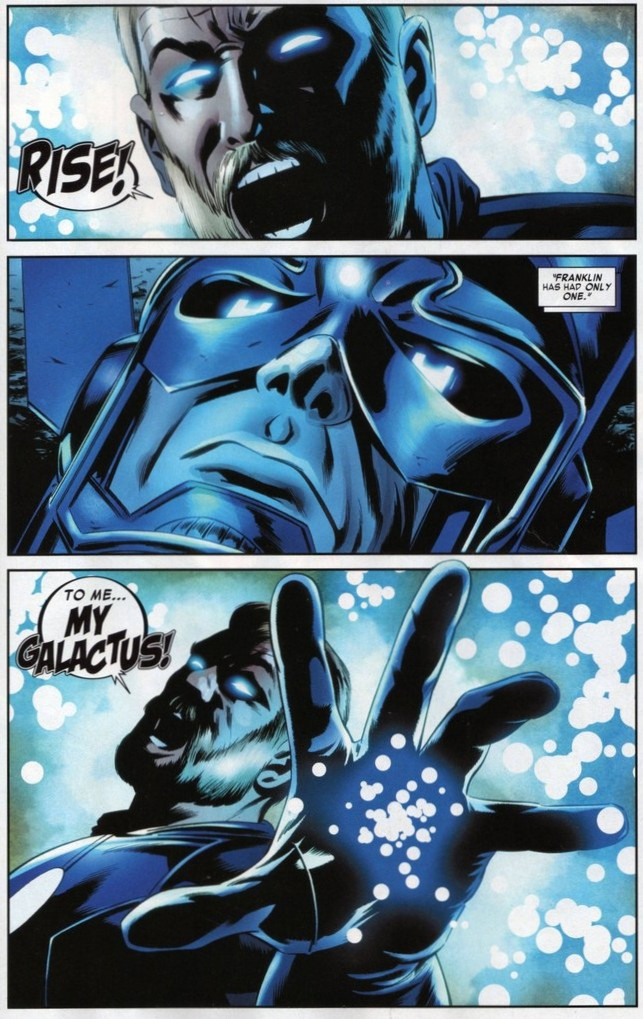 Galactus being raised from the dead by Franklin Richards. Fantastic Four #604

Not the answer you're looking for? Browse other questions tagged marvel comics galactus or ask your own question.

9
What was Galactus feeding on in planets?