This is a book I probably read in mid 1990s while living in Ashland, KY. It was a paperback, in English, probably around 200-300 pages. I believe the book opened with the main character discussing how he had a pet raccoon, right up until the day that said raccoon got into the medicine cabinet and ate an entire bottle of aspirin, which resulted in fatal stomach damage. A little later, the protagonist is reading a newspaper, and thinking to himself how he always likes to go to the obituaries to find interesting lurid stories about people getting stabbed in the eye with a screwdriver (I remember, as a kid, excitedly checking out our local paper's obituaries and learning that they were much more boring). Then, he embarks on a caving expedition. I don't remember if an accident happened, he got lost, or was just doing the exploring, but he finds himself in another world, and quickly learns that the world is populated by raccoons, with humans only found in books as an unintelligent species of hairless apes found in some parts of the world.

The protagonist wore contact lenses, which I partly remember because he rinses them in a stream (which now seriously weirds me out now that I know what that sort of bacteria can do when trapped against the eye), and might have had a set of glasses. He could juggle, and do Tae-Kwan-Do, because in one scene, he demonstrates his marketable skill as an entertainer by juggling some oranges, ending it with pulping one with a kick, which he then realizes is a bit violent of a skill to be demonstrating. He gets taken in by a raccoon, who I think might have been some sort of a scholar. The raccoons communicate with a sign-language system due to underdeveloped vocal cords, and I remember they do a sort of a hoarse bark as a method to get the attention of someone else to sign to them. Also, the raccoons typically brew their coffee loose, so that they can chew on the grounds at the end of the cup, and I remember the raccoon who adopted him being bemused when the main character not only refuses the grounds, but ruins a piece of paper to filter them out.

I think there's a ruling (religious?) caste that includes mohawked soldiers who fight with spiked gloves that latch to their arm when not in use, but can be flipped into position to fight. One of them was featured on the cover of the book. And at some point near the end, the protagonist is being pursued by them and is attacked by one of their dogs, with him defending himself with trying to kick the oncoming dog in the chest (I think with him noting that this is the best defense against a dog), only to learn that they're wise to that tactic, and outfitted their dogs with spiked collars that cut his leg as he kicks. I want to say that the book ended with one of the members of that caste approaching him and explaining that they need his help. And that's where the book left off, with a sequel that may or may not have ever been written (I got most of my books from the library, and they were notorious for only buying the first book or two in a series, in one case I remember vividly, only carrying the third book in one series).

Ah, and I found the right query. Steven R. Boyett's The Architect of Sleep 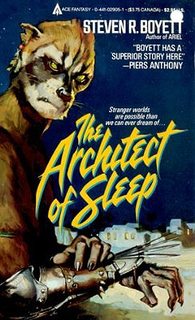 Jim Bentley's plans for the evening were simple: a movie and the graveyard shift at the 7-Eleven. That was before he stumbled into another world. Evolution has taken a very different direction on this parallel Earth, but some things are constant. Jim Bentley has fallen straight from his ordinary life into the most constant thing of all: war. Even as he struggles to learn the ways of a strange culture, to make a place for himself in what seems likely to be his home for the rest of his life, the tides of revolution are rising around him. Jim Bentley has a part to play in this war--for his coming has been foretold by True Dreamers. His feet are already set on a path that leads to the heart of the crisis. Like it or not, he is vital to the war efforts of the Architect of Sleep.

The raccoon was his roommate's pet and died from consuming caffeine pills, not aspirin. He just reads the newspaper in general to read about the violent deaths (and it's in part to remind himself how dangerous his job as a convenience store clerk is). The raccoon who adopts him is Truck (not the actual name, but the name he gives to her personal sign, named after the aforementioned pet), and is a deposed Architect of Sleep (a ruling class who received prophetic dreams). The soldiers are a bred caste called Stripes who are larger than the average racoon, have squarer shoulders, and customarily shave a reverse mohawk in their hair. Indeed, they wield spiked gauntlets.

The search that got me there was novel raccoons cave taekwando

Fair warning, there is no sequel, 34 years after the book was written. It's all a bit vague, but apparently this was Boyett's second book, and was going to be part of a five book series, before he had a dispute with the publisher and bought back his novel, something which he said killed his career as an author for 25 years. The second book, The Geography of Dreams was written in draft form, but was never published, and he doesn't expect to ever publish it. And based on some of the comments in his blog entries, he gets very irate when people pester him about it as he sees the situation as a bit of a personal failing that he does not wish to be reminded of.

12
Sci-fi book featuring robot dogs in the jungle
8
Scifi story - Humans leave Earth, racoons get ready to take over
10
Novel from around 8 years ago about kids staying young and being loaned to infertile parents
9
Short story where dogs are smarter than humans (IQ 400) and they hide it
10
Finding a book about a camp where Magic can be manufactured with technology
7
Creepy children's book where a homunculus was made
12
Fantasy story set in a pseudo precolombian Mesoamerica
8
YA novel where the world is divided by color
13
Book where members of a reptilian species eat their own kind to increase their intelligence