I'm looking for the name of novel/manga where entire class is summoned by goddess but the main character gets abandoned in a dungeon but founds ways to survive and gets a black system and he becomes a god. All the other gods are trapped by the goddess and he helps them. He also doesn't have magic until the other god helps him.

He uses those skills to kill monsters in a dungeon.

The goddess is a mad person who is trying to control the world. And the ENTIRE school class is transported.

As noted by Valorum, this sounds similar to a previous question, Manga with main character abandoned by goddess and classmates, where the answer was Hazurewaku no "Joutai Ijou Skill" de Saikyou ni Natta Ore ga Subete wo Juurin suru made, aka I Became the Strongest With The Failure Frame. 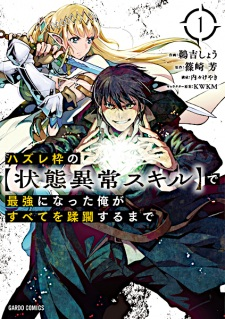 Along with his entire class, Touka Mimori was summoned to another world by the Goddess Vysis. While most were ranked quite powerful, Touka was the weakest among them, so it was only natural that he be disposed of. Vysis' first impression as a generous and loving woman soon gives way to her true, cruel nature, and she rallies his classmates against him, casting him into a cavernous labyrinth of death and despair.

Despite being the weakest, even he has a personal skill: "Abnormal State Skill." This ability, combined with his low level "poison" and "paralyze" powers, proves to be a deadly medley—hindering the movement of monsters, then letting poison whittle away at their health until they die without having a chance to fight back.

Gaining new abilities and companions along the way, Touka aims to exact revenge on that spiteful goddess who cast him into this hellscape.

I'm not certain of the differences, if any, but it seems there is an alternate version with the same name, different cover art, and a slightly different summary, published the year before.

A high school student who lived as a mob character, Mimori Touka. During the school trip, he and his classmates were summoned to another world. According to the summoning goddess, so many best ranked heroes like S and superior ranked ones like A were very unusual. Touka, however, was the only with the lowest rank: he was an E-rank hero, in the "failure frame" of the stepped pyramid frames. His status is overwhelming low when compared to his classmates. Moreover Touka’s peculiar skill — 【Abnormal State Skill】— looks like an absolute failure, so… like this, the former mob character and abandoned hero will absolutely become the strongest devil as he advances and strikes back.

Not the answer you're looking for? Browse other questions tagged story-identification novel manga or ask your own question.

6
Manga with main character abandoned by goddess and classmates

5
Forgotten Sci-fi novel title - class system and motorbike racing
3
Book series, Reincarnation, Different Gods and Goddess?
6
Isekai manga - protagonist repeatedly re-enters the fantasy world, time passes more quickly there
6
Manga with main character abandoned by goddess and classmates
4
Manga whose main character's level keeps resetting at level 15
1
Manga where MC is transported into another world while in a school bus with others and has the power to control others
3
Summoned to another world with four(?) classmates. Protagonist is separated but ends up with a group of female companions including a goddess
6
Isekai manga where male protagonist gives sweets from his original world as offerings to goddesses
0
Online manga about a boy accidentally summoning a demon at his school who fights people