I read this manga quite a few years back online (mangafox maybe?) but I think it was ongoing/unfinished. The main character is a physically strong girl known for breaking things (nicknamed something along the lines of the “god of breaking things”) and ends up having to help an actual fallen/unknown god gain followers and believers. I believe he also had an attendant of some sort. Genre was definitely shoujo romance.

This is Seirei Produce, a Japanese manga from 2009. There are only 10 chapters; it looks like it was cancelled after that.

Shiina Momose doesn't believe in fortune telling and the occult, but for some reason, she can destroy anything with a touch. One day while on her way to school, a young man approaches her and claims to be a God. Furthermore, he believes that he was guided towards her and for that reason he has become convinced that she should become his first follower!

The female lead, Shiina Momose, has the nickname "god of destruction" as seen in the below image. She doesn't appear to be physically strong, just cursed to have things break around her. She is approached by a minor god and his attendant and asked to become his first follower. 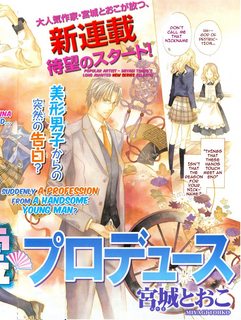 Found by searching mangaupdates for the tag "God-Human relationship" and filtering to Shoujo Romance Manga.

5
Manga with a god that sells dreams and a variety of god/animal characters
4
Manga about siblings moving to the countryside and a selfish God
2
Manga with a boy whose father was murdered (but is still around), living with a demon girl with magic hair
11
Manga where a girl dies every time a boy falls in love with her
4
Anime with two magician brothers fighting each other
4
Manga where a boy attempts to fight an evil god, he can communicate with a girl who is a sword and can use "God's Paw"
3
Isekai manga where a boy is strong against poison
3
Manga/manhua where MC became a god of a game world