I need help finding a fantasy or adventure movie from the '80s or even '70s in which, after the hero defeats the villain (a sorcerer perhaps), the villain falls to the ground and rapidly ages in a second, his head turning into a skull, and then to dust.

It was a similar effect as in Indiana Jones and the Last Crusade, but that is not the movie.

In my movie the head turning into a skull was on the ground, and it took a big part of the screen on the left. There was some dust moving, to describe the fast flow of time or just simple dust because it was some desert or something. There was only a helmet or a similar item left on the ground at the end.

We were taken to the movie theater by teachers, so the movie was considered kid appropriate; only this scene was scary. I believe that it mentioned that an immortal sorcerer (or knight, king, someone with authority) sent the main hero on some quest, which eventually ended his immortality. So I am not totally sure that the hero actually defeated him in a fight; perhaps his completion of the quest simply led to the aforementioned death.

Edit: a post from another site where I asked the same question, from a guy from my country who watched same movies in theater (that is, those which were bought and translated in the '80s in SFRJ), he has different memories from this movie, but the same about this scene I mention, so please check if that does ring a bell to anyone. He wrote:

I remember I watched the movie where is some young man in the main role, and he went on an adventure with some older man... or he did it in the favor of that older man. Because something like... that another guy is too old and this younger goes instead of him. Now when... when this young man fulfills those tasks (or maybe it's just one or two) that is an older man suppose to doo - older man rapidly age falls to the ground went to the skeleton and at the end disintegrate into the dust! And of him just stay a helmet and armor. But it's not the death of the villain and not death at end of the movie... it happens somewhere in the middle of the movie I think.

This is an essentially perfect match for the Green Knight's death scene at the end of Sword of the Valiant (1984). The movie was an intermediate-budget retelling (a Golan-Globus production) of Sir Gawain and the Green Knight, the second-most famous work of Middle English literature (after The Canterbury Tales). So it is entirely plausible that one might have seen it on a school trip. (On the other hand, my high school A. P. English teacher, who has us read Sir Gawain and the Green Knight—in a Modern English translation—and was a major film buff who also taught the school's Film as Literature class, was not at all fond of this film.) 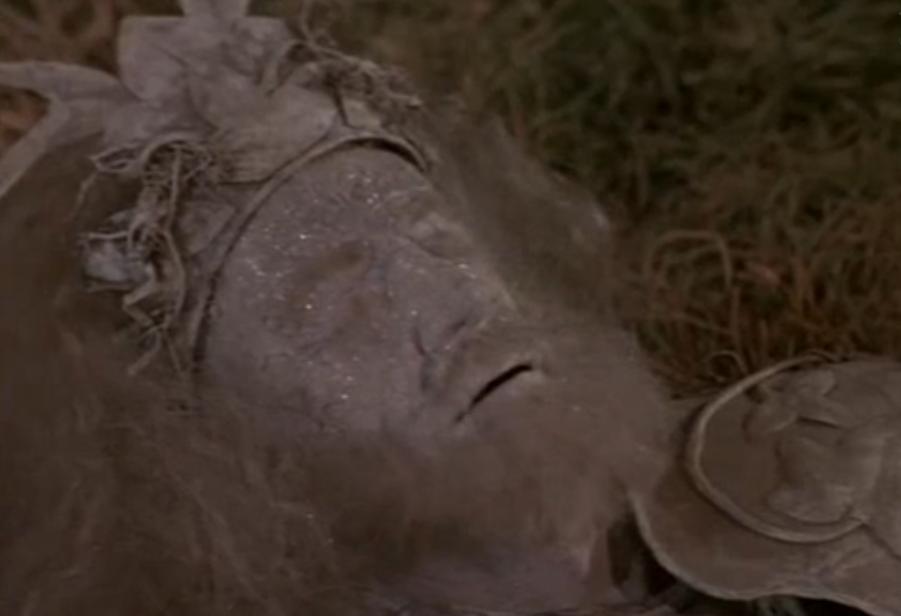 The Green Knight—who is immortal at the beginning of the movie and demonstrates as much by surviving being beheaded—is played by Sean Connery. After beheading the Green Knight but not killing him, Gawain is sent on a year-long quest to find the Green Knight's home, where they will face off again. After Connery is defeated by Miles O'Keeffe Gawain in combat, he falls and his body crumbles to dust. As you can see, his head is toward the left side of the screen in his final death shot, and there is a lot of dust involved.

In ancient Greece, a race of evil aliens from the Moon land on Earth. For years they have terrorized the nearby city of Samar. Hercules (Maciste in the original version) attempts to free the people of the kingdom of Samar from the rule of their evil queen. She is under the spell of invading Moon Men who demand children for sacrifice in hopes their spilled blood can revive their own dead queen.

The Queen of Samar has made a pact with the Moon men to conquer the world and become the most powerful woman alive. The downtrodden residents of Samar cheer the arrival of the mighty Hercules, who on their behalf faces deadly obstacles, battles the Moon monsters and eventually confronts the leader of the Moon men, Redolphis, a metal-headed giant.

Found in the Live Action Films section of the Rapid Aging TVTropes page, which I found by Googling tvtropes instant ageing.

This reminded me of Mio min mio (aka a "Mio in the Land of Faraway"). Although the scene is somewhat different than what you describe. But maybe you're confusing several similar movies?