Can Rogue harness Wolverine's adamantium blades after touching him?

Rogue has the ability to harness the abilities of other mutants for a short while upon any sort of skin contact. Upon touching Wolverine she is able to use his regenerative properties but what about his blades? Adamantium is experimentally deployed in Wolverine's bones so would she able to harness that power too or instead Wolverine's old bone claws would come out of her hands?

Rogue does get Wolverine's claws when she absorbs his abilities, but she gets his original bone claws, without the adamantium. The bone claws can be seen in X-Men Legacy #235 (2010), when Rogue absorbs the abilities of several X-Men. 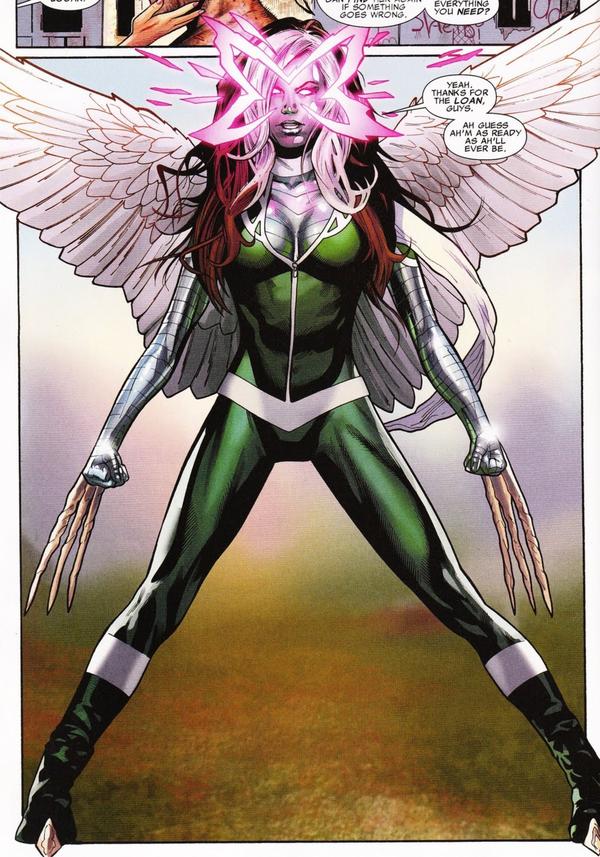 Rogue can harness abilities of only living things. She can't just absorb strength of a rock like Kevin (of Ben 10).

As Adamantium implant isn't biological ability of Wolverine, it can't be harnessed by her.

There've been a change in Wolverine a few years back.

On the origin, the character hasn't natural claws, they were deployed to him with the adamantium on his skeleton, but his only natural powers where his animal instincts and senses and his overwhelming regeneration power.

I remember perfectly a comic (more than 20 years ago) where Rogue touched Wolverine and got his regeneration and senses, but not the claws.

However... at some point in time (that I don't know exactly because I stopped reading comics for several years) there was a change in the Wolverine origins resemble, and from this point the claws where part of his original powers, although they were bone claws, quite fragile and prone to break (and regenerate) until adamantium covering came to the rescue.

From that point and on, as their bone claws were part of their original powers, they can be replicated by characters like Rogue.

No. Simply because adamantium is a material where as bone it is a material but everybody is born with bone in their body. If he was born with adamantium then most likely yes but because it is a gene alteration then no. If she absorbed wolverines powers popped the bone claws and absorbed colosses then she might be able to coat the bone claws coated in whatever metal colosseum is made out of but it wouldn't be adamantium

Yes she could since she takes on the physical traits of whomever she touches the longer she touches them so in essense it would be a possibilty but they would fade like most mutant traits physical or otherwise. It would be kind of stupid if she could only take on a specific thing about the person but she usually takes on personality, mutant powers and physical attributes as well. Memories are a part of the psyche so again she takes a little bit of every part of the person whom she touches.

Someone mentioned Rogue can't absorb strength of a rock from Ben 10. Except Rogue has absorbed Ben Grimm's abilities as the Thing. She also was able to absorb Colossus' ability to turn in to Omnium. But I can't remember if that happened in his armored form or not.

So I question the non organic part of that claim. Granted, Colossus' omnium skin is considered an organic steel, but still.

There was a story line where Colossus was super heated, and then super cooled, and he froze in his armor form. And Rogue touched him to absorb his powers, IIRC, in the hopes to take his power from him and revert him back to human form (when she steals powers from people, they are unable to use them for a short time, due to being weakened IIRC).

But again, since Colossus' omnium steel is considered living organic steel, that may be why she was able to do that in his metallic form, even though he was frozen in his metal form.

Not the answer you're looking for? Browse other questions tagged marvel x-men wolverine rogue or ask your own question.

34
Why were Wolverine’s metal blades shaped differently than his bone claws?
1
Did Wolverine's bones regenerate before being enhanced with Adamantium?
13
Why doesn't Blood stick on Wolverine's blades?
12
Professor X's mind reading and Wolverine's adamantium skull
12
Does Rogue ever take advantage of the removable power suppression we see?
3
Can other people touch Rogue?
9
Can cold adamantium cut through adamantium?