Anime about a school boy living together with an unintentionally (?) annoying alien

About 15 to 20 years ago I watched a TV cartoon series (probably an anime) about a school boy who was living together with some alien (I think it was an alien, but I do not know its origin; maybe a deamon?). I am not sure whether the boy considered them friends, because the alien regularly used his various supernatural/reality bending abilities to annoy the boy and make his life harder. If I remember correctly, then this was not the obvious intention of the alien, but it seemed to be more like a result of it badly understanding the human nature.

If I remember correct, the alien went to school with the boy and the boy's family and friends knew the alien and considered it as nice. More generally, it seems noone else noticed the "suffering" of the boy.

I believe that the alien had some recognizable name, and that the series was named after it.

Here is a rough sketch of what I recall of the alien's face (it might be quite off though). It had otherwise human anatomy, and was appoximately as tall as the boy. Usually it had a neutral expression on its face. It was able to talk. 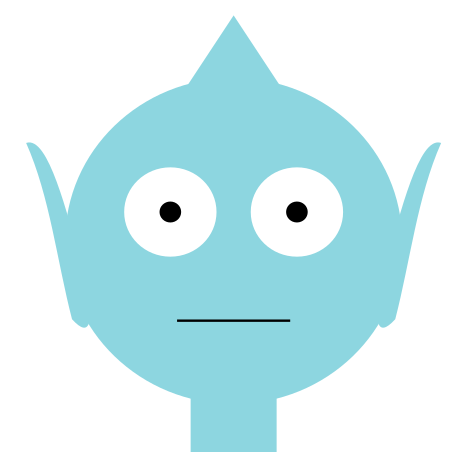 I watched it on German TV (thus, with German dub), most likely RTL II, but I do not remember.

A scene that I remember

I remember the following scene from one of the episodes.

The alien, the boy and some friends are stranded on a small rubber boat on the ocean. At some point the alien steps out of the boat and it turns out that the water is very shallow as the allien's legs only go in ankledeep. So the boy is relieved and also climbs out of the boat, immediately plunging into deep water. As the boy struggles to get back to the surface he sees that the alien just extended his legs to reach to the ocean's floor.

The series is called Taro the Space Alien. The summary from Wikipedia states

Takashi is just a regular fifth grader when a new student, Taro Tanaka, appears. Later Takashi realizes that Taro is an alien and tries to find out more about him. He has many adventures with Taro. Takashi soon gets into much trouble and starts to have a bad reputation because of Taro such as giving his childhood friend Kyoko an explosive bomb for her birthday (which Taro had switched with a Taro doll Takashi had meant to give Kyoko). Taro also constantly makes Takashi annoyed, like one time Taro invited Takashi to his birthday party, but Taro made Takashi walk to the end of a long hallway to go to his room (at the end of the hall was a sign that said turn around). When they went back to the beginning of the hall, Takashi finds that Taro's room was hidden near the entrance of Taro's house. Taro also makes Takashi really embarrassed like for example, Taro somehow made the entrance to a bathroom of an amusement park turn into a rollercoaster ride where all Takashi's clothes flew off and he was stuck up there the entire day, hanging on for life.

I most likely watched it on RTL II (Germany) at around 2001.

Also, here is an actual picture from the series (my drawing was better than what I expected, but of course, not super accurate): 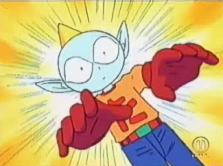 16
YA paperback about a boy talking to an alien on his computer, alien asking for help
2
80's or 90's children's book about an alien boy who lives at The School
10
Sci-fi manga about a boy with an alien girl classmate
10
80/90s UK children's drama series about an "alien" boy with radio weapon
5
Cartoon TV series about a boy and an alien (flying head) living in the boy's watches
10
Anime about a red haired boy suddenly being transported into another world
4
Sci-fi book about a teen boy that meets an alien boy in human form and becomes friends with him