I'm looking for a book I read some time in the late 90s-early 00s, translated into Hungarian, but I'm all right with the English title. A sci-fi title set in the mid-future with space flight. The main character is a bounty hunter/assassin, member of a secret order who have advanced tech at their disposal, and whose training concludes with being spaced for 3-4 seconds. He keeps his arsenal in a secret compartment in his apartment.

He's tasked with investigating a disappearance/murder (maybe), and he ends up uncovering a pseudo-vampire ring. The investigation culminates with him hunting a vampire on a docked spaceship, with a modified pistol that launches miniature wooden stakes. The vampire captures him, but instead of killing him, she tells him about her species, who's an ancient, immortal race of bioweapons, and who's trying to make amends for their atrocities by killing other evildoers, and that she hired him to find out if they truly cannot be killed. The story ends with the vampires departing in peace.

A few points I managed to remember:

Is it possibly this. A lot of the points line up.

The Long Orbit by Mick Farren 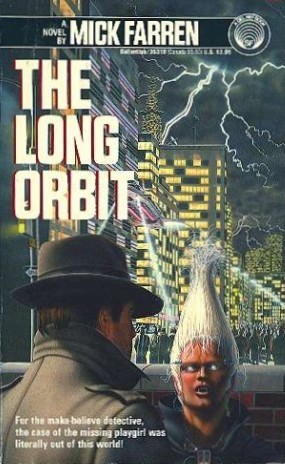 The stuff that dreams are made of.

Marlowe lived a life of fantasy while out in the real world a robot proxy contributed to the economy on his behalf. Marlowe's image--down to the trench coat and the dingy "office" where he lived with his cat, Greenstreet. But he had never had a real case until a leggy looker dressed to the nines--Forties style--asked him to find her missing sister.

Suddenly he was on the run for his life, a pawn in a high stakes game for the control of off-Earth development. All Marlowe wanted was to return to his own comfortable world of make-believe. But first he would have to take good hard look at reality--for if couldn't find a way for both sides to win, everyone would lose...

According to a user on reddit there are vampires in it.

Not the answer you're looking for? Browse other questions tagged story-identification vampire hard-sci-fi or ask your own question.

5
Can't Remember the Title of an Urban Fantasy Vampire Novel
9
Secret agent working for lizard overlords travels through parallel universes
1
Identify a modern Titanic movie having vampires
13
What vampire movie is this?
6
Sci-fi book series about two orphan boys who are adopted and trained by two monster hunters
7
Fantasy story entertainer hired as decoy/replacement
8
Vampire film about a college guy turning into a vampire