Movie where an evil spirit is exorcised with poison

I remember the ending scene of a movie that I watched. In it, a girl, her father, and some other man are discussing how to exorcise an evil spirit out of the girl. The man places a cage with a rat or some other rodent near the girl and lays out his plan. The girl is to be injected with a poison that will induce ventricular fibrillation, effectively killing her. The evil spirit will then have to possess the rodent instead if it is to survive. Once the spirit has taken over the rodent, the girl will be revived. The three go through with the plan, but while the girl is lying on the bed without a pulse, the father sees that this is taking longer than it should and rushes over to her. The spirit possesses the father instead. The other man starts the procedure to revive the girl immediately and then does something to make the spirit possess him instead of the father. He tells everyone to run while he stays behind and injects himself with the poison.

It's Queen of Spades: The Dark Rite 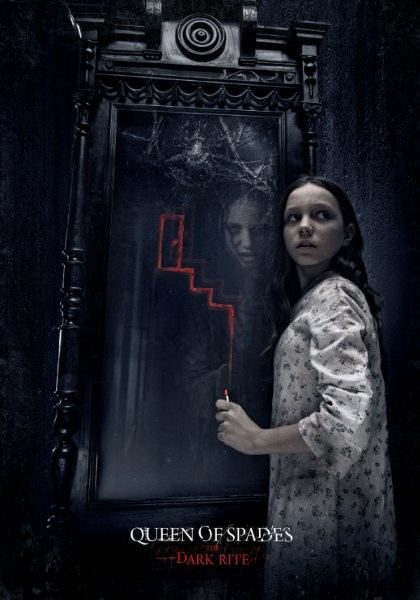 I rewatched the movie, and it is absolutely this one. In the movie, a group of teenagers summon a malevolent spirit known as the Queen of Spades, thinking it to just be a bit of harmless fun. The Queen begins killing off the children. After it kills two of them and starts to possess Anya, her father tracks down the man who originally told them about the Queen of Spades. As the Queen is about to possess Anya, the man, who we learn lost his son to the Queen, comes up with a plan to put Anya in a state of clinical death using a toxin. The idea is that the Queen will be forced to relocate to another host, a rat in this case, or lose her connection to the material world. While Anya is lying on the hospital bed dead, her father ends up rushing over and gets possessed by the Queen. The man tells the Queen to take him instead when he sees that the girl's father will not be able to hold her at bay. Anya's parents revive her with a defibrillator, the man tells them all to run, then injects himself with the toxin and dies. This is actually the second-to-last scene, but everything happens as described.

Not the answer you're looking for? Browse other questions tagged story-identification movie horror ghost or ask your own question.

9
Story Identification: 5 people with special abilities, one who is immortal, and a plan to revive all the Jews killed during the holocaust
11
Story set in the Middle East involving demons, sorcery, and someone implied to be Gilgamesh
11
Movie where a group go to a cabin with an evil spirit, once the spirit is killed it moves into the body of the person who killed it
11
70s/60s Novel work on evolution and advanced intelligence
4
Movie where people try to kill a possessed woman with morphine
3
Movie where people communicate with a spirit using dice