Has Stephen Strange officially become the Sorcerer Supreme? In Doctor Strange, the Ancient One was killed unexpectedly.

Is there any clue that Strange has become the Sorcerer Supreme in the MCU?

Strange is yet to become the Sorcerer Supreme in the MCU. At the end of Doctor Strange he has been made Master of the New York sanctum.

The Ancient One: You defended the New York Sanctum from attack. With its Master gone, it needs another, Master Strange.

It is later spelled out for us at the end of the film that the Sorcerer Supreme "job" is still vacant with interviews pending.

Wong: You might have a gift for the mystic arts, but you still have much to learn. Word of the Ancient One’s death will spread through the Multiverse. Earth has no Sorcerer Supreme to defend it. We must be ready.

Then in all of the media Strange appears in afterwards: Thor: Ragnarok, Avengers: Infinity War and Avengers: Endgame no mention is made of Strange having become the Sorcerer Supreme. For such a big event it would have at least a mention so we can assume it hasn't happened yet.

However, to answer why Wong is acting like he is in the Spider-Man: No Way Home, Wong is a mentor to Stephen. He did so in Doctor Strange and has carried on doing so since. However, Strange is the Master of the New York Sanctum and so is more superior to Wong (under current information anyway, things may change in NWH!). Wong can still be stern and caution Strange even if he is a lower ranked because that's what mentors and more experienced people do.

What If...? episode 4 has some extra information on this. We get the following quotes:

The Watcher: The man of science became the Sorcerer Supreme.

The Ancient One: Without her death, you would never have defeated Dormammu and become the Sorcerer Supreme, and the guardian of the Eye of Agamotto.

In Spider-Man: No Way Home, we learn that

Wong became the Sorcerer Supreme during Strange’s absence between Infinity War and Endgame, and remains so as of the end of the movie.

At the moment, it's not entirely clear.

The Marvel Fandom page for the MCU version of Dr. Strange states that he is currently the Sorcerer Supreme:

Doctor Stephen Vincent Strange M.D., Ph.D is the Sorcerer Supreme and a Master of the Mystic Arts. Originally a brilliant, although arrogant, neurosurgeon, Strange got into a car accident which resulted with his hands becoming crippled. When all Western medicine failed him, Strange embarked on a journey that led him into Kamar-Taj where Strange had made the discovery of magic and alternate dimensions, being trained by the Ancient One. Though focused on healing his hands and returning into his career, Strange learned more of the mystic arts and helped the Masters prevent Kaecilius from merging the Earth with the Dark Dimension, but not before witnessing the Ancient One's death. Following the demise of their mentor, Strange became the protector of the New York Sanctum in New York as well as the Earth's protector from any new inter-dimensional threats.

That in itself doesn't prove anything, as Marvel Fandom is not an official source. However, the page does offer a citation from an official source, that being Dr. Strange's bio on Marvel.com, which states the following:

This statement appears above the entries for both the MCU and comics versions of Strange.

Given that this page combines entries for both versions though, I'm not convinced that the Sorcerer Supreme statement applies specifically to the MCU version.

Also, as noted in TheLethalCarrot's answer, Wong stated at the end of Doctor Strange (2016) that Earth had no Sorcerer Supreme at that time.

Wong: You might have a gift for the mystic arts, but you still have much to learn. Word of the Ancient One’s death will spread through the Multiverse. Earth has no Sorcerer Supreme to defend it. We must be ready.

It's possible that MCU Strange became Sorcerer Supreme some time after this, but it seems odd that Marvel would choose to have such an important moment for the character happen entirely off-screen, and neglect to even mention it in passing in any of the movies.

It's also worth bearing in mind that the comics version of Dr. Strange didn't become the Sorcerer Supreme until a full decade after his first appearance. He debuted in Strange Tales Vol. 1 #110 in July 1963, but didn't inherit the title of Sorcerer Supreme from the Ancient One until Marvel Premiere #10 in September 1973. 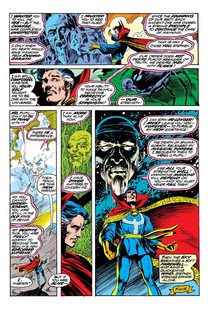 The latter issue also featured the first confrontation between Dr. Strange and Shuma-Gorath. It's rumoured that Shuma-Gorath will appear in the upcoming Doctor Strange in the Multiverse of Madness (2022), and if so, that would seem like the perfect time to have Dr. Strange become the Sorcerer Supreme within the MCU.

We'll obviously have to wait and see if that's what will actually happen though.

Yes, Stephen Strange is the Sorcerer Supreme on the MCU.

This exchange from Hulk and The Ancient One on Endgame proves it.

Ancient One: It's the duty of the Sorcerer Supreme to protect the Time Stone."

Hulk: Then why the hell did Strange give it away?"

Ancient One: What did you say?

Yo me that implicitly recognises Strange as the Sorcerer Supreme in two fronts. First as protector of the Time Stone quite explicitly, second by the reaction (or lack of thereof) of the Ancient One.

Wong is the Sorcerer Supreme "by a technicality".

Peter Parker seeks out the help of Doctor Strange to make people forget he is Spider-Man.

Parker refers to Strange as the "Sorcerer Supreme" but Strange refutes this, saying that Wong became the Sorcerer Supreme "by a technicality"; when Strange dusted, the Earth had to have a Sorcerer Supreme, and so Strange lost the title and has not regained it as of the events of Spider-Man: No Way Home, if he ever had it to begin with.