After Peter Parker was bitten, what happened to the rest of the radioactive spiders?

Did Peter Parker take part in, or have knowledge of what happened to the rest of the radioactive spiders? Were they disposed of or are they are still hanging around in a lab somewhere?

I'm not sure whether this was retconned (and how many times...), so I'm going by what was shown on Spidey's first appearance, on Amazing Fantasy #15.

According to that, there were no other radioactive spiders. One single spider was accidentally irradiated, and it has bitten Peter Parker: 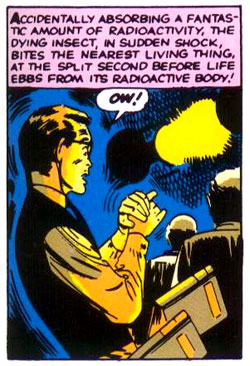 Apparently, spiders were insects in 1962

The spider was dying due to the amount of radiation it absorbed, so we can assume its body was disposed (by the janitor?).

When the question indicated spiders (plural), my assumption was the recent Amazing Spider-Man movie which featured dozens of transgenic spiders weaving for Norman Osborn. In most versions of the canon story, there was only one spider, which was irradiated.

As far as I can tell, the spiders are still at Osborn's laboratory being used for whatever insidious and yet financially profitable scheme they were commissioned for. In this particular instance, I don't believe they were strictly radioactive, let's call them transgenic spiders.

Their bite, while painful, does not appear to offer superhuman abilities to anyone besides's Peter Parker indicating, perhaps a greater purpose or genetically engineered process being held within or released through the bite of the spider.

Though it was not clearly stated the radioactive spiders would not have had the same effect on anyone else that they had on Peter. It was meant to be revealed during the course of the movie that Parker's powers were not an accident as they appeared but something done intentionally.

To cover the whole conspiracy theory properly, you need to see: Was the Untold Story Cut from the Amazing Spider-Man?

If you are talking about the Marvel Earth-616, there were no known "other spiders" after the first one bit Peter Parker. It died from radiation poisoning soon after spreading its radiation-activated powers to an unwitting recipient.

If we're speaking about the spiders [plural] from the Sam Raimi trilogy, its somewhat unknown. It Was said that traits from various spiders were taken and recombined into "These 15 genetically altered super spiders" to which Mary Jane pointed out "There are only 14; one's missing," [not counting the one that escaped and bit Peter]. But after that school visit, I don't believe any further thought or mention was given to them, even to finding the one that escaped.

To be fair, these weren't "Radioactive" spiders, and the one that bit Pete just wondered off. Thinking about it, this is a Severe ball drop on Peter's part; presuming they were all genetically and structurally identical, any one of those spiders could then imbue someone else with Peter's powers! Not an ideal situation....

In this alternate comic universe, the spider was a test subject for an attempt by OzCorp to create a new super soldier serum, and is listed as OZ EXPERIMENT 56, ARACHNID NO. 00. This, and other frames indicate that other animal testing was ongoing and that there was a possibility of other spiders existing.

It is initially unclear as to what happens to the other test animals (if any are even spiders), as Norman Osborn moves onto human testing soon after and the lab is destroyed soon after.

Much later we get a new Spider-Man, Miles Morales, also bitten by a radioactive spider. It turns out that this spider is number 42 (it has 42 printed on its back, where Parker's has 00), and has been living in the ruins of the lab ever since. Given the numbering, we can presume there are a fair few unaccounted for. Given the enhanced durability that the Oz formula seems to confer, it is quite possible that many survived for quite some time.

Since the second Secret Wars the remaining spiders are probably a moot point since the Ultimate Universe no longer exists.

38
Why does Spider-Man shoot webs from his wrist in the movies?
7
In "One More Day," did Spider-Man really have to make a deal with Mephisto?
8
Why didn't Spider-Man gain natural spinnerets with his initial powers?
19
In Spider-Man's story line, is there any other newspaper except the Daily Bugle?
17
What happened to the spider that bit Peter Parker?
7
Which Marvel characters have STIs?
16
Is Spider-Man's blood really radioactive?
10
Does Spider-Man’s webbing dissolve in Raimi’s Spider-Man trilogy?
12
An episode from Spider-Man animated series (1994-1998) in which he has a dream sequence or an hallucination about being an actual spider