Why not settle near the polar caps?

In the novel Dune, according to the map in the back of the book, Arrakeen is at latitude 60 degrees, and Carthag a little farther north. Early in the novel, there is a description of a globe with small polar caps. Later on (about 1/3 of the way through), there is a mention of a water factory at the pole.

It's not really clear whether Arrakis has an axial tilt of 90 degrees or something more moderate. In either case, why would one not build the big cities right at the polar cap, where there is plenty of water? Even if the spice is at less extreme latitudes, it's not like the cities need to be near the spice -- they fly the machinery in and out anyway.

If the Baron is to be believed, his own investigations have revealed that spice isn't merely less at the poles, but entirely absent. That being the case, while situating a city closer to the polar caps would put the population closer to a source of water, it would put them dramatically farther away from the reason that the city exists in the first place, to farm spice, and hence wouldn't be economical even with the ability to fly heavy equipment around.

“As bad as that,” the Emperor murmured, and his tone of derision did not escape the Baron. “Tell me, my dear Baron, have you investigated the southern polar regions of Arrakis?”

The Baron stared up at the Emperor, shocked by the change of subject. “But . . . well, you know, Your Majesty, the entire region is uninhabitable, open to wind and worm. There’s not even any spice in those latitudes.”

You may wish to note that the implication is that because of its remoteness, the Fremen positively own the southern pole, using it as a test-base for their plantings (presumably due to the high moisture content relative to the rest of the planet) and keeping the region free of Harkonnen influence, which the Baron incorrectly ascribes to storms and worms. 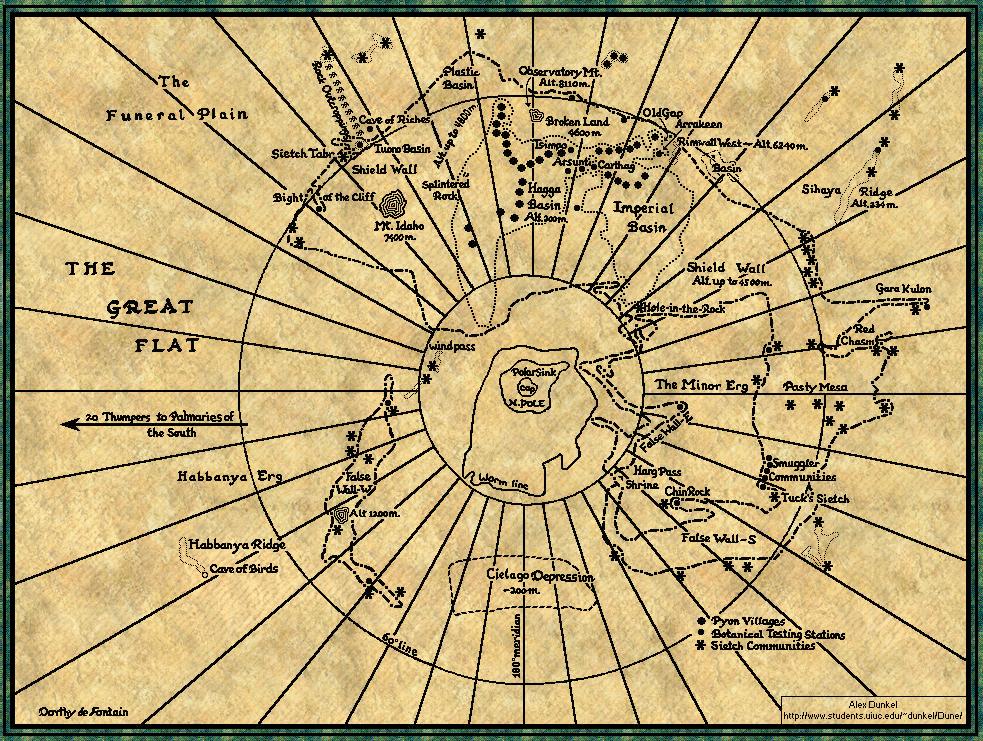 This is the map of Arrakis' northern hemisphere as it is printed in the book. Unfortunately, the topography isn't particularly clear because of the limitations of how the map was printed.

However, this version that I found on Reddit should help to make things clearer: 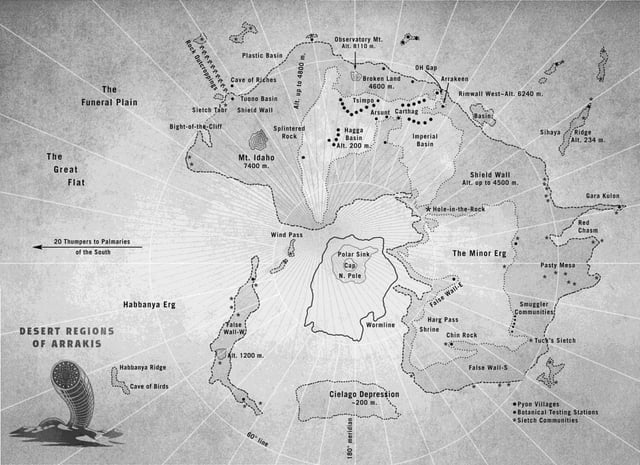 The dark shaded areas, such as the one that encircles most of the north polar region, indicate an elevated and mostly rocky surface which the worms cannot cross. While there are sandy basins within this region, they are cut off completely by the Shield Walls surrounding them. This why spice harvesting is "beyond the shield wall" and the Fremen must use atomics to breach the Shield Wall in order to ride the worms into battle against the Harkonnen (the breach is later replaced by open water to fend off worms).

The pole is surrounded by open desert. There is a "wormline", beyond which the moisture from the stunted ice cap is sufficient to deter the worms, but this is at a pretty high latitude. Even if Arrakis has a smaller axial tilt than Earth, settlements here would be subject to extended darkness throughout winter, and it's likely to be pretty cold during those nights (deserts aren't deserts because they're hot - it's because they're dry - the Antarctic is a desert). The lower latitudes where most of the settlements are located would give more even seasons while not suffering the immensely oppressive heat nearer the equator. They also have good access to the open desert where spice is harvested.

Belt just around 60 degrees of latitude is usually an optimal zone for habitation on a human-habitable planet. Because of the rotation of a planet this zone usually displays moderate temperatures and high precipitation (though there are no rains on Arrakis in the normal sense, it would still apply somewhat to what's called el-sayal - rain of dust, which often brings moisture to the ground).

What's more, a planetary weather patterns usually are not as extreme as in other zones there. Also, a polar region is usually high-pressure zone, which means that atmospheric circulation is usually from a polar region towards 60 deg latitude. Translating that into Arakkian terms, this means that winds there will be colder and will carry moisture from polar caps.

In addition to those, rather general planetary weather pattern facts, there are Arrakis-specific ones, like the Shield Wall and other rock formations - the former is a protection from the powerful storms and the latter is a protection against worms.

And last, but not least, is the orbital mechanics. The closer to the equator the better, but obviously Arrakis makes that impossible and I think irrespective of the tech level, fuel consumption would always be a part of economic calculation (be it up or down the gravity well). And obviously, whole infrastructure needs to be protected from both winds and worms, too, which makes it rather obvious which location is best.

18
DUNE takes place near the north pole of Arrakis – why no midnight sun?

40
In the Dune series, why are they not using computers and programming related technologies?
8
Why did the Dune mini-series (2000) not make Muad'Dib god-like, unlike the 1984 movie?
52
Why does Count Fenring choose not to kill Paul Atreides at the end of Dune?
28
The geography of Arrakis
14
Why is water not imported to Arrakis?
14
How did Arrakis become a desert devoid of oxygen and then habitable again?
3
Why did Odrade not recognize the Weirding Way?
6
Why are Fremen children not all pre-born with prescience?
18
DUNE takes place near the north pole of Arrakis – why no midnight sun?