I was collecting this series in the late 1990's / early 2000's but I'm not sure when it actually started. It was published in black and white and followed a private detective agency (possibly in small-town America?) featuring a small group of either unlucky and/or other than competent antiheros (unfortunately, I don't actually remember any of their names). I think it was more of a parody series and spent a bit of time riffing on urban fantasy that was popular in time.

The setting did include magic and a relative (aunt?) of one of the characters may have been a witch of some kind.

One of the main things I remember was that author appeared directly in the comic as a highly cranky rodent and the team either owed him money or had some similar relationship.

Each book tended to be fairly self contained.

Soulsearchers and Company, scripted by Peter David. Originally published by Claypool Comics. According to the series listing at comics.org, #1 came out in 1993, and #82 (the final issue of the series) came out in 2007. That listing also indicates that many of the later issues did not include any clear statement regarding which company was now publishing it. I didn't know that, because I only have a trade paperback collection of the first six issues, plus a few single issues that go no higher than #12. Here's a cover-scan of that first TPB collection -- it may look familiar? 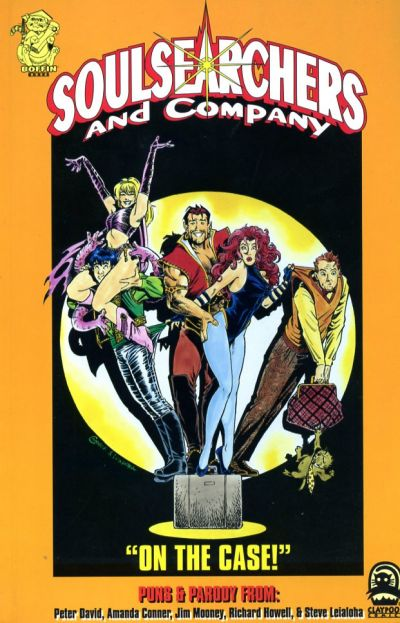 Note: A quick check through some of the individual issue listings on comics.org indicates that Richard Howell was often credited as "co-plotter" of the stories, which implies that he and David would usually hash out the idea for the next story together, and then David would script the actual dialogue.

Here are various points which correspond with your memory of what you're looking for:

All things considered, I feel confident that this is what you were remembering!

P.S. Searching for "Soulsearchers" and "David" on Amazon, I concluded that none of the stories are available for Kindle, but there are at least four "Soulsearchers and Company Omnibus" book editions which must reprint many of the original stories. (But I don't see any details regarding how many of the 82 issues have been reprinted this way.) Here's a link to the first Omnibus volume, alleged to be 298 pages long, but that page doesn't specify how many issues were included to bring it up to that length.

13
A fantasy book about runes where the hero learns to chop wood
10
80s Fantasy: Reluctant king with magic crown that loses powers when cold/wet
6
Searching for European Scifi Comic (80s-90s) about flight to new earth
10
Book series with teleporation tech, societal break down, and teenagers
5
Cartoon in the late 80's early 90's about dinosaurs with armour on
16
Sci-Fi novel about a man that has the power to make everyone he meets forget him
6
90s comic about a grim fantasy world with flaming swords
7
Detective Story on the moon with a space yacht and an escaped prisoner
4
Novel where one of the protagonist's informants is an intelligent zombie who lives in a movie theatre