Was Wil Wheaton's part cut from the movie, "The Last Starfighter" (1984)

Wil Wheaton is listed in the credits of "The Last Starfighter" as "Louis' friend," but I was not able to spot him when I watched the movie. Was his part cut from the DVD version of the movie? https://www.imdb.com/title/tt0087597/fullcredits/?ref_=tt_cl_sm

On his website, Wheaton stated that his scenes were cut from the movie before they were even filmed. However, he was already in the background of some scenes, so he was still credited, and receives a small annual payment for that role.

When I was a little older, I shot a movie called The Last Starfighter out there. We shot at a trailer park up in a canyon somewhere, and I remember thinking that the winding canyon road we drove on to get there looked like something from the Twilight Zone. Later, I found out that they had, indeed, shot the series on that stretch of highway. I remembered how excited I was to work on a movie that was — as far as my young mind could tell — was basically all about a video game that turned you into a real starfighter. I remembered how disappointed I was when I saw the titular game on the set, and discovered it was an empty cabinet with only lights inside. (Fun fact: the classic Atari Game Star Raiders was supposed to be a licensed game from Last Starfighter, but the deal fell through. They kept the gameplay and changed the sprites. Bonus fun fact: My scenes were cut from the movie before we filmed them, but I was already in the background of several scenes as one of the kids who lived in the trailer park, so I ended up in the credits. Every year, I get a hundred bucks or so in residuals. Semi-related fun fact: the market at the trailer park had a Star Castle game in it, and that’s when I fell in love with that game.)

Incidentally, I think he's been misidentified in the quote provided in the previous answer. That quote says he's the kid in the red football jersey in an early scene, who's also shown wearing a blue jacket over what appears to be the same red jersey in another scene near the end. That kid is visible is visible standing on the left of the group of four kids near the middle of the image below, and his face doesn't look much like Wheaton's to me.

Also, that kid looks too old and tall, like a teenager. According to IMDB, The Last Starfighter was filmed in May of 1983, when Wheaton would've been just ten years old, a couple of months shy of his eleventh birthday. He wouldn't even have hit puberty yet. I actually think he's the kid standing on the right of that group of four. He looks about the right age, and the face bears a closer resemblance to Wheaton's.

For reference purposes, here's an image of Wheaton from Stand by Me, which was shot roughly two years later in the summer of '85, according to IMDB. 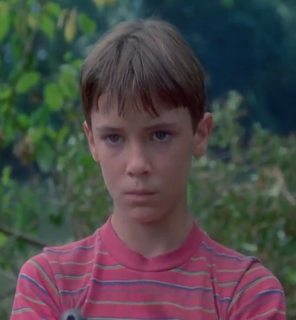 And here's a magnified image of the kid I think he played in The Last Starfighter, the one on the right of this group of four. The face and hair look like a perfect match; his hair is shorter in Stand by Me, but it's the same colour and style. 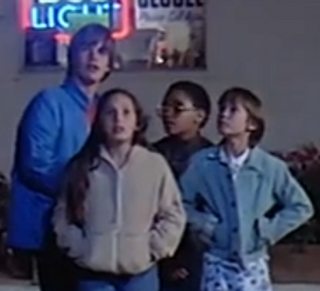 He's still in a couple scenes in the movie, at least according to IMDb:

Although Wil Wheaton's speaking scenes were deleted, he can be seen in two scenes, running around the trailer park early in the movie (wearing a red football jersey), and in the final scene, where he is obscured, standing behind Louis Rogan (wearing a blue jacket, possibly over the red jersey).

I haven't seen the film myself, but the below image seems to be one of his scenes:

Not the answer you're looking for? Browse other questions tagged behind-the-scenes the-last-starfighter or ask your own question.

70
Why didn't a French actor play Captain Picard? What was the reaction to this on the part of the French?
0
How was E.T character created in the movie E.T -The Extra Terrestrial?
0
"Betazoids" in The Last Starfighter versus Star Trek: The Next Generation
13
Who came up with the Dwarven Windlance?
16
Is the Leigh Brackett first draft of the script for Star Wars episode 5 available?
24
Why was the book, Pale Fire, used in the Blade Runner 2049 movie?
12
Was Space Gary cut from the final movie?
3
When was the Defiant engine room set last seen/torn down?