Low budget Scifi show about people stranded on or near Mars(?) attempting to get back to Earth

I'm trying to remember the name of a live action show I saw on Canadian TV in English in probably the early 90s. It was probably a kids show. It was fairly low budget, about a group of people stranded on some kind of space station or facility built into an asteroid, on either one of the Martian moons or an asteroid. I'm pretty sure asteroids was related, because they were in caves (as opposed to some kind of built structure) during much of the episode I saw. There was gravity, which suggests either it was a very large asteroid, or they just skipped over that problem because the budget was so small. I think the main characters were 3 teens; two teen brothers and a unrelated teen girl. The girl was wealthy or from a powerful family, although her money was of no use in their current situation, and her snobbishness was a source of friction. I'm fuzzy on this but I think the boys were Caucasian. I am even less certain about the girl's ethnicity. There were other adult characters, but I can't remember any details.

I think later on in the series they broke off a piece of the space station and used it as a makeshift spaceship to start travelling back to Earth. The episode I saw was an early one, where they are still struggling with surviving some recent disaster that has made their survival doubtful and damaged the integrity of their environmental systems.

I wonder if this could be Escape from Jupiter (1994), a one-season Australian production. The user-generated synopsis says:

Some point in the not too distant future, a mining/research colony is set up one of Jupiter's moons, Io. All's ok, until a major earthquake (or what ever the Io equivalent is) destroys the communication array and puts the colony in danger of falling down the side of a canyon. In a desperate bid to escape back to Earth, the colonist have to reactive an abandoned space station and use it to get back to earth. The event's that take place on the trip (malfunctioning computers, low food, and rogue weapons satellites to name but 3) test the colonist to the limit.

And a picture of Michael, Kingston and Kumiko: 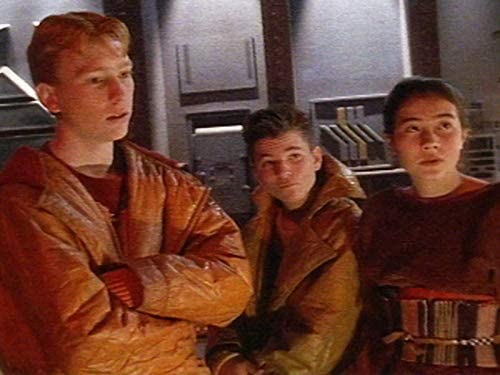 The Wikipedia page has a lot more details; the two teens who are friends are likely Michael Faraday (the main character) and Kingston, his best friend. If you remember a spoiled teen girl, that's probably Kumiko, the daughter of a pair of seismologists who arrive from Earth just before things go wrong.

In the second episode, after the introductory first episode, Michael, Kingston and Kumiko are trapped in an emergency shelter when the mine they are exploring is flooded with lava. This precipitates the disaster for the mine, and they must evacuate into the derelict ship, KL-5, that brought the miners and their equipment to Io.