Where in Ireland is Miles O'Brien from?

Obviously O'Brien is Irish, but is it ever clear which city/county/region in Ireland he comes from?

This is confirmed in a couple of places.

Interestingly, this location was part of the original script for DS9: Homefront, but changed to Dublin for unknown reasons, presumably because most Americans would be more familiar with Dublin or simply to reflect Colm Meaney's accent:

O'BRIEN: Look, Odo... Do me a favor? If you get a chance, drop by and visit my folks in Killarney.

As noted in another answer, Miles has ties to Dublin and that's where his parents currently live. Various of the EU novels mention that he grew up there. For example:

Keiko knew there was little chance of Molly falling over, as her father was holding the back of the antique bicycle that she was struggling to learn to ride. She even kidded him that everyone must have ridden bicycles when he was a little boy growing up on Earth, but he assured her that he wasn’t that old. “I learned a lot younger than you when I was a little boy in Dublin,” he said. “My brothers taught me. There’s no better way to learn balance.”

As far I can tell, no canon episode or film has ever specified which part of Ireland O'Brien was born in, or grew up in.

His personnel file on StarTrek.com states that he was born in Killarney, Ireland. 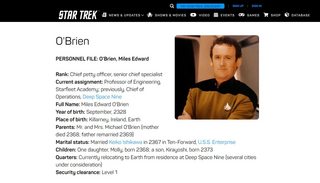 However, his personnel file in the Star Trek: Starship Creator game states that he was born in Dublin, Ireland. 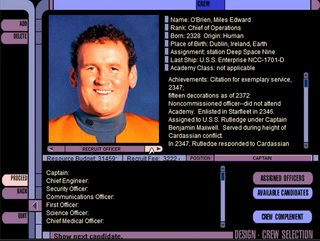 It has been established in canon that his parents live in Dublin (DS9: "Homefront").

ODO: Well, I take it the Battle of Britain has been won yet again.

BASHIR: There's a Spitfire with your name on it waiting in the hangar. When you get back from Earth, you can take Clive's place in the squadron.

ODO: Somehow I doubt it.

O'BRIEN: Look, Odo, do me a favour. If you get a chance, stop by and visit my folks in Dublin. Just make sure they're okay, you know?

O'BRIEN: Good. I'll let them know you might drop by.

And the Star Trek Encyclopedia states that his family resides in Dublin, possibly implying that he has other relatives there.

I found numerous sources claiming this, including the Spanish Memory Alpha wiki and Wikipedia, which cites it to Appendix B of the book Star Trek Chronology: The History of the Future (1996).

There's even a petition to honour him by having a plaque put up in the real town of Killarney. It was not successful; I guess there isn't a huge density of Star Trek fans in County Kerry.

It should also be noted that he speaks with a Dublin accent in the show, following the actor Colm Meaney who is from Dublin. Some fans fear that this means Dublin has expanded to cover almost the whole island of Ireland by the 24th century, but perhaps a more likely explanation is that Miles O'Brien was born in Killarney and grew up in Dublin.

19
Is Tuvok the only black Vulcan?

19
Why was Miles O'Brien never promoted?
59
In the Deep Space Nine Episode "Defiant", what was the dispute between Riker & O'Brien?
5
Do we ever hear from O'Brien's 'dog' again?
2
Do we know whatever happened to Tosk?
2
How did Miles O'Brien time travel?
2
What kind of martial art did Miles O'Brien get this move from?
30
Did Chief O'Brien go to Starfleet Academy?
9
What is James T. Kirk's ethnic background?
27
Who can trigger ship-wide alerts in Star Trek?
10
Where is Dr. Bashir from?