What is the information on Captain Kirk's tombstone?

In episode 3 ("Where No Man has Gone Before"), Gary Mitchell attempts to kill Captain Kirk. Before doing so he uses his powers to create a grave and conjures a tombstone, shown here: 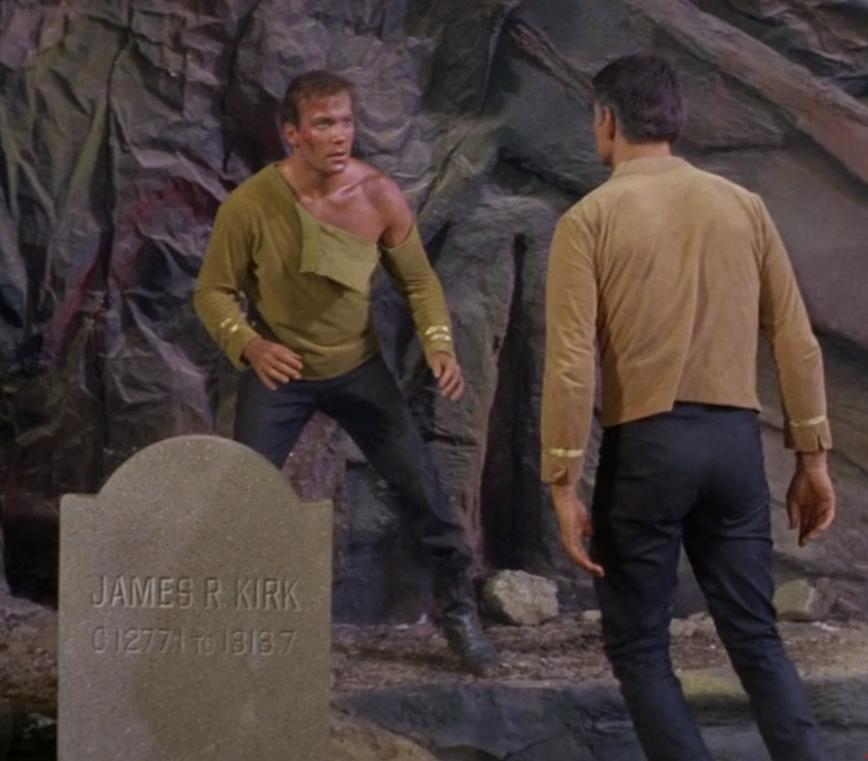 The information on the tombstone is rather puzzling. As best as I can tell it says:

On a regular tombstone this would represent the years that the deceased lived. However, the date range here is nowhere close to any of the answers given for when the show took place. If we drop the "1"s the date range is at least within a few hundred years of the answers given, but it still presents a problem of Kirk being apparently 400+ years old. Moreover, the tombstone has his middle initial as "R", yet his actual middle initial is "T" as far as I can tell (e.g. his Wikipedia entry is listed as James T. Kirk).

So what exactly is going on with this tombstone?

The episode begins on 1312.4 with the receipt of the distress signal from the SS Valiant. At 1312.9 Kirk makes another log entry after the disastrous encounter with the galactic barrier. At 1313.1 he records one as they head for Delta Vega, and again at 1313.3 when they decide to beam back from the surface.

Kirk records his final entry at 1313.8, noting the deaths of Dr. Dehner and Lt. Commander Mitchell. Thus 1313.7 would be approximately correct for the time of the final encounter with Mitchell.

The Memory Alpha page for Stardate has this to say:

(Note that I don't have access to the raw scripts, but sources like this one validate some of the details here.)

Working backward, then 1277.1 would be 36.6 days earlier. The "C" gives us a clue that this is not Kirk's lifespan that's depicted. It makes sense that this could be the length of Kirk's command of the Enterprise, this mission being his first in command. ("Where No Man has Gone Before" being the first regular episode shot after "The Cage," though episodes were not aired in the same order.)

The name "James R. Kirk" was an error in production (as previously answered):

On the infamous and incorrect "James R. Kirk" tombstone, created by Gary Mitchell in TOS: "Where No Man Has Gone Before", Kirk's middle initial was R, not T. According to D.C. Fontana in the introduction for Star Trek: The Classic Episodes 1, when the mistake over the middle initial was discovered, Gene Roddenberry decided that if pressed for an answer on the discrepancy, the response was to be "Gary Mitchell had godlike powers, but at base he was Human. He made a mistake."

The middle initial is a well known anomaly that can also be ascribed to the episode being a pilot. It is answered by this SFF question.

As for the dates,, you failed to see the decimal points in the two dates. This

There are many Stardate calculators out there and they all give different answers, so I won't present them here. I don't think these are true "Stardates" as Roddenberry imagined. If the person who made the prop got the middle initial wrong, (s)he could also have misunderstood what the date range was for and simply assumed it was the normal thing one puts on such a stone: birth and death years.

If we simply assign the star dates to years, this puts Kirk's "age at death" at a more reasonable 36.6 years.

According to Memory Alpha, the episode's "Captain's Log" lead-in monologue has Kirk giving a date of Stardate 1312.4, which is at least close to the latter date. Kirk would have been 35.3 given the "birth date". In 1966, when the episode was filmed, William Shatner turned 35.

This is still anomalous, because the episode started at 1312.4 and the confrontation happened at 1313.7, and it's hard to believe that the episode spanned 1.3 years of in-universe time. But remember the Enterprise made a very long run out to the edge of the Galaxy at maximum warp.

2
Significance of Captain Kirk's name?
26
Was Star Trek's original Captain Kirk always fond of antiques?
5
What is the meaning of the way that Kirk's clothes are?
11
What happened to Captain Kirk's body?
22
What do the badges on Kirk's dress uniform represent?
31
What is Captain Kirk's secret pain?
16
Why did Captain Janeway feel that using the Doctor as an expendable messenger boy was more important than keeping him around to heal the crew?
4
Why would Captain Kirk even think a bluff like the Corbomite manuever would work?
15
Did Kirk's captaincy of the Enterprise have a canon starting date in TOS?
8
What is James T. Kirk's ethnic background?