It's an isekai manga, and is likely to be a light novel adaptation. I read this sometime last year before MangaDex's maintenance break.

The goddess who originally transported the male protagonist to the other world demanded he give her offerings in exchange for some kind of power (I can't recall what). I believe he has a power to somehow get sweets from his original world—it may be from an item menu/shop that only he could use, or something similar. He offers them by putting out the sweets, praying, and the sweets disappear. The goddess loves the sweets so much that she demands more of different varieties.

I remember one scene where the protagonist created chocolate (or something else) and the goddess got jealous that she didn't get to eat it, and immediately demanded he offer her some.

Eventually, other goddesses find out that this one goddess was getting sweets, so they get jealous and wanted the sweets as well. So, they ask the boy to also offer them treats. I think there was a scene where he offered a whole basket full of various sweets. The original goddess gets upset that her secret got found out, because she wanted to keep the sweets for herself.

I'm not exactly sure but I think the group of goddesses wanted to keep this a secret because it was considered forbidden by another god/goddess.

Todemo Skill de Isekai Houro Meshi fits with it being an isekai manga where the protagonist gains favor, and thereby power, by his cooking skills (aided by his skill, which lets him pull Japanese foods into this fantasy world), although his first companion is a giant fenrir, Fel. 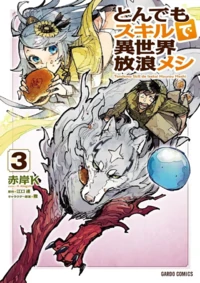 He does later seduce several goddesses over to his side by virtue of sweets, such as Ninlil, Kishar, Rusalka, and Agni.

1
Boy with glasses who cooks, and has a familiar slime
2
Manga about a feminine boy with "God's eyes" who cooks for a guild