Where is Dr. Bashir from?

Bashir's personnel file in the non-canon Star Trek: Starship Creator game states that he was born in London, England. 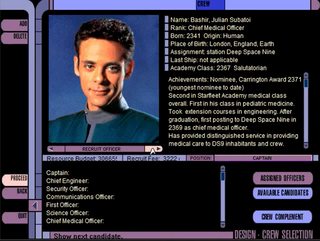 He was also implied to have ties to London in the DS9 novel, "Hollow Men".

The Centaurian Embassy took up the whole of a row of what had once been four tall, terraced town houses. Sisko and Garak materialized in a small flower garden at the front of one of the houses, at the foot of a set of wide stone steps that led up into the buildings.

It was late evening in early autumn. The air was damp and smelled of leaves. Twilight. Looking out from where they stood, with the embassy behind, there was a quiet street running parallel to the row of terraces. Over the road, running left to right, was a line of trees and then a row of lamps that went along the length of the embankment. Beyond the thread of lights, Sisko could see the dark line of the river.

"Where are we now?" Garak said, staring up at the gray wash of the sky, and then taking in the outline of grayer buildings that spread out along the far bank of the river.

"I think I may have heard the doctor mention it."

"Well, this is certainly more his part of the world."

Bashir's place of birth was never established within canon, however, according to his Memory Alpha page, DS9 writer and producer, Ronald D. Moore, said that his family's roots were "probably in England", hence his father, Richard, speaking in a London accent when he appeared in the episode, "Doctor Bashir, I Presume".

"In my mind, Julian was of Sudanese (like Sid), Indian, or Pakistani extraction, but that the family's roots were probably in England, hence the accents." (AOL chat, 1997)

In the real world, there are a large number of families of South Asian descent living in England.

Some of Bashir's hobbies are also arguably clues as to his British background. For example, he and O'Brien were regularly shown playing darts at Quark's (DS9: "Prophet Motive").

GARAK: I take it your character is some kind of rich dilettante with a fascination for women and weapons.

GARAK: A spy? And you live here?

BASHIR: Yes. I work for one of the nation states of this era, Great Britain, which is battling various other nations in what is called the Cold War. This apartment, my clothes, weapons, even my valet were provided to me by my government.

GARAK: I think I joined the wrong intelligence service.

And he and O'Brien enjoyed taking part in holographic recreations of the Battle of Britain (DS9: "Homefront"). 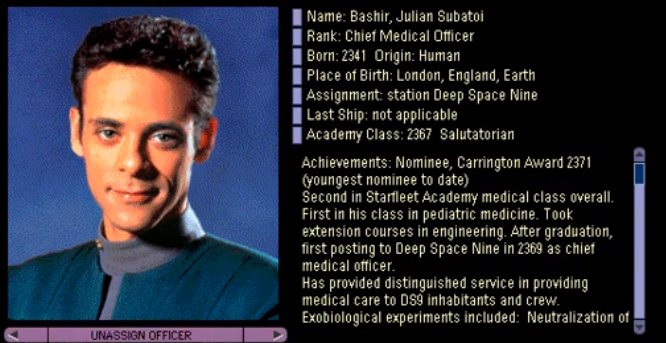 70
Why didn't a French actor play Captain Picard? What was the reaction to this on the part of the French?
13
Morally/Legally, how could Dr. Bashir, a Federation doctor, perform the operation he did to Worf's brother Kurn by wiping his memory?
5
Starfleet Medical: Use of blood draws in typical crew physicals?
6
How could Bashir (and Sisko) believe that mutants are correct?
11
Why does Captain Picard drink tea?
53
Is Picard actually fluent in French?
10
How does Sloan get past DS9 security?
11
How did the non-French pronunciation of Captain Picard's name come about?
11
Where do these ships come from?
9
In Star Trek, are the humans actually all speaking English?