Links between "The Daleks" comics and the television series

The Wikipedia article on the Daleks states: "Although much of the material in these strips was directly contradicted by what was later shown on television, some concepts like the Daleks using humanoid duplicates and the design of the Dalek Emperor did show up later on in the programme.[112]"

I don't recall the Daleks using humanoid duplicates in the TV21 comic, does anyone know what material the wiki article is referring to?

The statement about the the Daleks using humanoid duplicates in the comics, and this "later" showing up on Doctor Who is simply false. The Daleks first produced robotic humanoid infiltration duplicates in the fourth episode ("Journey into Terror") of the First Doctor serial "The Chase," which was aired in June 1965. "The Daleks" one-page comic series had only been running in TV21 for about five months at that time, and there are no instances in the early run that involve the Daleks creating human duplicates.

The claim about the "design of the Dalek Emperor" later appearing on Doctor Who is also, while not precisely false, fairly misleading. The Emperor Dalek on Skaro did appear in 1967 in the Second Doctor serial "Evil of the Daleks," looking like this. 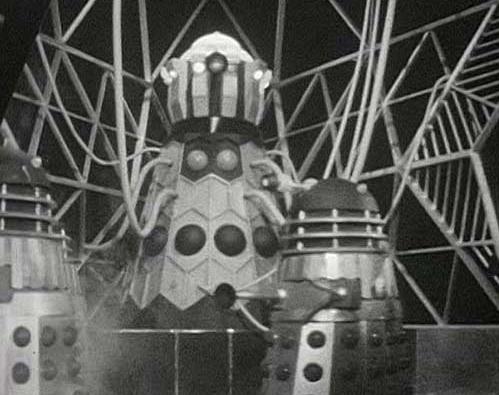 However, apart from the general Dalek features they shared, this was nothing like the Dalek Emperor from the stips. 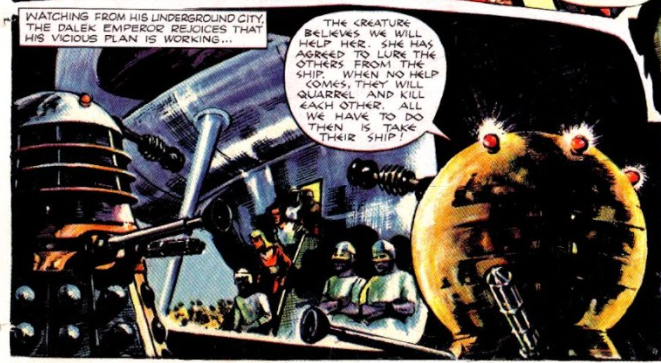 As I said, it is true that the comics' sphere-topped Emperor Dalek design did eventually appear on the show, but that was not until the very last Dalek story of Doctor Who's original run, in 1988. 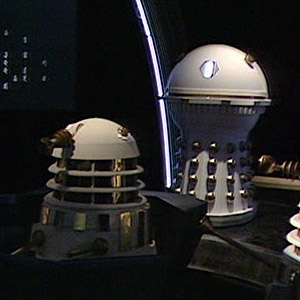 This shape was presumably an intentional allusion to the comics. Under John Nathan-Turner, the show in the 1980s included many specific allusions to the early days of the Doctor Who. For example, the use of duplicates in "Resurrection of the Daleks" was a call-back to "The Chase." Ironically, however, sometimes these references ended up being bungled! (For example, at the time "Attack of the Cybermen" was made in 1984, "The Tomb of the Cybermen"—two which "Attack" was a sequel—was completely lost, and the designers had to recreate the appearance of Cyber Controller from nothing but still photographs; they consequently missed the fact that Cyber Controller was supposed to have an exposed brain.) Presumably, these kinds of mistakes appeared because nobody had seen the some of original stories in decades.

Similarly, there were a lot of publicity materials produced for the show in the 1980s and (after the show's cancelation) in the 1990s, which gave incorrect descriptions of events from the 1960s. Whether these were based on faulty memories or misunderstandings, they were clearly produced without anyone bothering to consult the surviving original scripts. I think that if Wikipedia's description of what Doctor Who: The Sixties has to say is accurate, the book's errors are probably a further product of such sloppiness.

Not the answer you're looking for? Browse other questions tagged doctor-who comics dalek or ask your own question.