Two Scenes From A Conan The Barbarian Story?

I believe these two scenes are from a Conan story, although I'm not sure — it's been sixty years since I read it. The first scene is early in the story. Conan is with a woman who betrays him somehow. When he finds out, she is afraid he is going to kill her, but he only throws her out the window into a dung heap. Somewhere in the course of the story he encounters a man who wears a Mongol-like pigtail; I can't remember if he was an ally or an enemy. The two lose contact; shortly afterward Conan finds himself in a dark, abandoned city or castle that is filled with supernatural evil. He sees the Mongol from a distance; approaching, he discovers the man has been decapitated and his head is suspended by the pigtail.

The decapitated head hanging by his own hair in the darkness is from 1935's "The Servants of Bit-Yakin" (frequently anthologized under the alternative title "Jewels of Gwahlur"), one of the original Conan stories by Robert E. Howard:

He approached the lotus grove by a circuitous movement, and scarcely the rustle of a leaf proclaimed his passing. At the edge of the trees he halted suddenly, crouched like a suspicious panther among the deep shrubs. Ahead of him, among the dense leaves, showed a pallid oval, dim in the uncertain light. It might have been one of the great white blossoms which shone thickly among the branches. But Conan knew that it was a man's face. And it was turned toward him. He shrank quickly deeper into the shadows. Had Zargheba seen him? The man was looking directly toward him. Seconds passed. The dim face had not moved. Conan could make out the dark tuft below that was the short black beard.

And suddenly Conan was aware of something unnatural. Zargheba, he knew, was not a tall man. Standing erect, his head would scarcely top the Cimmerian's shoulders; yet that face was on a level with Conan's own. Was the man standing on something? Conan bent and peered toward the ground below the spot where the face showed, but his vision was blocked by undergrowth and the thick boles of the trees. But he saw something else, and he stiffened. Through a slot in the underbrush he glimpsed the stem of the tree under which, apparently, Zargheba was standing. The face was directly in line with that tree. He should have seen below that face, not the tree-trunk, but Zargheba's body—but there was no body there.

Suddenly tenser than a tiger who stalks his prey, Conan glided deeper into the thicket, and a moment later drew aside a leafy branch and glared at the face that had not moved. Nor would it ever move again, of its own volition. He looked on Zargheba's severed head, suspended from the branch of the tree by its own long black hair.

As noted in the other answer, the scene with the woman who betrays Conan thrown into the cesspool is from another Howard story story, "Rogues in the House" (1934).

The wench was sitting cross-legged in her shift on her unkempt bed. She turned white and stared at him as if at a ghost. She had heard the cry from the stairs, and she saw the red stain on the poniard in his hand. But she was too filled with terror on her own account to waste any time lamenting the evident fate of her lover. She began to beg for her life, almost incoherent with terror. Conan did not reply; he merely stood and glared at her with his burning eyes, testing the edge of his poniard with a callused thumb.

At last he crossed the chamber, while she cowered back against the wall, sobbing frantic pleas for mercy. Grasping her yellow locks with no gentle hand, he dragged her off the bed. Thrusting his blade in the sheath, he tucked his squirming captive under his left arm and strode to the window. As in most houses of that type, a ledge encircled each story, caused by the continuance of the window ledges. Conan kicked the window open and stepped out on that narrow band. If any had been near or awake, they would have witnessed the bizarre sight of a man moving carefully along the ledge, carrying a kicking, half-naked wench under his arm. They would have been no more puzzled than the girl.

Reaching the spot he sought, Conan halted, gripping the wall with his free hand. Inside the building rose a sudden clamor, showing that the body had at last been discovered. His captive whimpered and twisted, renewing her importunities. Conan glanced down into the muck and slime of the alleys below; he listened briefly to the clamor inside and the pleas of the wench; then he dropped her with great accuracy into a cesspool. 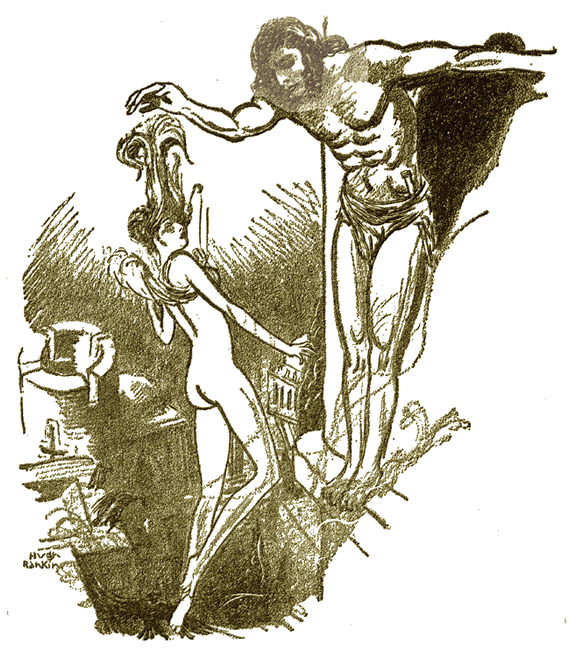 "Rogues in the House" by Robert E. Howard

"He listened briefly to the clamor inside and the pleas of the wench; then he dropped her with great accuracy into a cesspool."

Not the answer you're looking for? Browse other questions tagged story-identification conan or ask your own question.