What exactly is the vow the Watchers have to take?

The Watcher in his dimension, watching the events of the multiverse, when Ultron breaks into the said dimension.

I know that in the comics

some Watchers have already intervened in some situations, hence breaking the vow.

But I would like to know if there is a similar situation in the comics, where

Ultron (or someone else) breaking into his dimension and attacking him.

My question is : If a Watcher is attacked or if the place where he reside is threatened, can he intervene or is it breaking the vow? I want to know for the comics and in the episode 8 situation.

Assuming he didn't already break it with the current actions in the episode.

dimension The Watcher is in. Being part of the vow somehow.

Sorry for all the spoilers blocks I didn't want to ruin anyone's episode.

EDIT : I rephrased my question. I tried to be vague not to spoil while still trying to convey my point but I guess I wasn't clear enough.

In the comics, Uatu and his clan of Watchers are bound by a vow taken by the head of their clan, Uatu's father, Ikor.

In short, Watchers aren't forbidden to defend themselves but they are forbidden to interfere with the 'destinies' of other races. 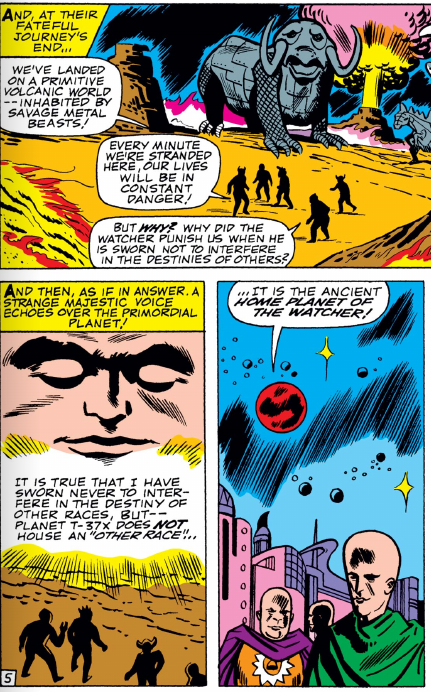 Purely for the record, Uatu has broken this vow so many times in the comics that it's more like a vague guideline to him.

Not the answer you're looking for? Browse other questions tagged marvel marvel-cinematic-universe marvel-what-if-2021 or ask your own question.

11
What Exactly Is The World Security Council?
13
What exactly are Jessica Jones' powers?
5
Are the Watchers able to break the fourth wall?
11
What exactly are Iron Man's Repulsor blasts?
8
What was the creature at the end of "What If...?" episode 1?
2
Any indication of what time it is at the end of the first "What If…?" episode?
2
Why does What If...? have a mixture of original and new voice actors?
1
Have comic villains protected themselves from the kind of attack shown in What If..? episode 3?
11
Does the Watcher reside in a different Universe in episode 8 of What If...?