The female (who has pinkish hair) lead married the crown prince at a young age, which was planned by the queen so that he wouldn't marry someone else who would boost his status.

The queen wants her son to become crown prince, but her son doesn't want to be the king.

The female lead also helps change the law so that the heroine could become duchess and have power that doesn't require her to marry the prince.

This is This Villainess Wants a Divorce!, aka Survive as the Hero's Wife. It is an isekai.

We all hate the greedy villains hell-bent on sabotage. Enter Carnelia Easter, the awful secondary villainess of the romance I’m reading, who trapped the prince in marriage at the behest of the evil empress. I didn’t shed a tear when her head’s lopped off, but now I’m Carnelia! 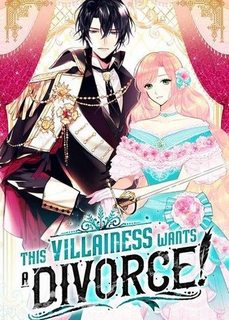 The empress has the main character marry the prince and act as her spy as she tries to ensure her son becomes the next emperor.

Later in the story the main character does help another woman inherit the title of duchess by changing the empire's laws; it's been a while since I read this so I don't recall if she was the heroine of the original novel or not, but the event does happen.

Not the answer you're looking for? Browse other questions tagged story-identification manga isekai webcomics or ask your own question.

6
Fantasy manga about a girl who travels back in time to old Japan
3
Isekai Manga about Protagonist with no Magic?
2
Korean or Chinese manhua about a girl who reincarnated into a noble family
5
Woman transported to a medieval world, recruited by a prince to help his friends
3
manhua/manhwa: isekai, FL with redish/pinkish hair adopted by noble family
3
Manhua in which the female lead is the stepmother of the villain
2
Manga where the red haired female character went back to time to change her fate
4
Male lead is last human surviving, who gets killed and reincarnated back to when he's a child