VHS cartoon with a cat-shaped hot air balloon called the Kitcataloon(sp): "It looks like a cat but it flies like a balloon!"

This is going to sound so silly, but for the life of me I can find NO information about this cartoon and was wondering if anyone here knows what I am talking about.

I don't know if it was a series, but the tape we had was Halloween-themed, with the crew of a hot air balloon that looked like a cat going to meet famous monsters (specifically, Dracula, Frankenstein, and the Wolfman). The balloon was called the Kitcataloon and everyone who saw it would say "It looks like a cat? But it flies like a balloon!" in varying degrees of wonderment or fear, depending on the situation.

It was a cartoon that would draw the scenes as the characters spoke. It almost looked like they did it in MS Paint, but this was a VHS tape. There was a scientist, a teddy bear, a robot, and a girl/alien named Jelly Bean. The teddy bear would always be scared and hide in the picnic basket.

I distinctly remember some of the songs too! One was about long legged beasties that go bump in the night, another was about Dracula, called the Count Dracula Rag, I think.

"Oh Count Dracula, please let me be! I'm just a skinny little kid and my blood tastes bleh, so don't you put the bite on me!"

I wonder if it was a bargain bin find, and that's why there's no real mention of it? Either way I hope someone here can help.

Billy Comeau's 1985 Monster Hits: Who's Afraid of the Dark is likely the case, with the musical release it's based off of being Captain Billy and the Cataloon Crew, Monster Hits. 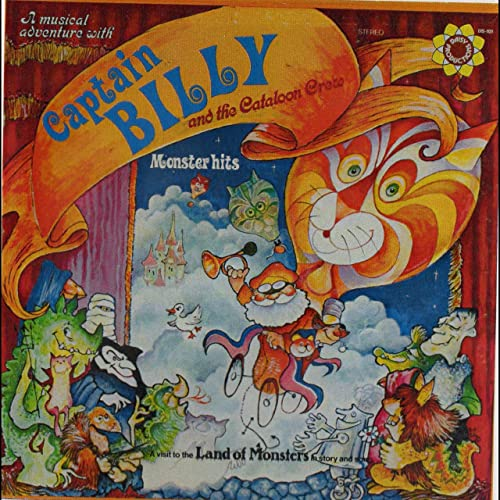 The "Dracula Rag" is there, as well as other monster songs, and the image shows the cat-shaped balloon, which is apparently named the "Kitcataloon" (mentioned in the first song), also referred to as a "Cataloon".

Found with a search for "dracula rag" and then the actual cartoon found by search for Billy Comeau animation and following the links in his WorldCat entry. Searching the title led me to a page with links to several of the Read-Along Magic Videos.

Not the answer you're looking for? Browse other questions tagged story-identification movie cartoon or ask your own question.