Was Batman based on The Count of Monte Cristo?

I was just watching "So you haven't read" for Alexandre Dumas' "Count of Monte Cristo" (a bit ironic since not only have I read it, I did it in two different translations, English and Russian :P) and the video stated that Batman was based on/inspired by Count of Monte Cristo.

A bit of surface googling doesn't seem to bring to light any confirmation of that assertion, other than the suggestion that some later Batman writers presumably based Bane (and not Batman) on CoMC - which to me at least makes a lot more sense, given the origin stories of the three characters.

Is there an official confirmation from any creators that The Count of Monte Cristo had influenced Batman as a character (or barring that, anything in Batman comics, Bane included).

No. This is Likely a Conflation of Batman’s Three Musketeers Origin With Other Notable Works by Alexandre Dumas

1. Bob Kane’s inspiration: like many old comic book characters, there are legal and copyright questions about who created Batman. First, we absolutely know that Bob Kane created Batman, because DC has record of his original contract, which names him sole creator: http://www.npr.org/2012/08/11/158494206/batmans-biggest-secret-no-its-not-bruce-wayne

Bob Kane has stated on several occasions that his inspiration for Batman:

Inspired in equal measure by Leonardo da Vinci’s 1485 design sketches of an “ornithopter,” a 1930 mystery movie entitled The Bat Whispers, and the 1920 silent film The Mark of Zorro starring Douglas Fairbanks, the commercially savvy Kane managed in short order to assemble the Bat-Man “from an assortment of pop culture debris that together transcended the sum of its parts”

2. Questions About Who Created Batman Enter Bill Finger. Bob Kane himself admitted it was a mistake to not credit writer Finger in the many years he maintained sole creatorship. Kane himself, over the course of his life defended himself against “conjectures,” “misrepresentation,” and “distortions of the truth” and expressed misgivings about his business arrangement with Finger. However, more recently, Kane has lamented that:

“I always felt rather badly that I never gave him a byline,’ said Kane recently. ‘He was the unsung hero’”

Assuming, therefore, that Kane himself admits Finger contributed to the narrative creation of Batman, then Finger’s own inspiration enters the picture.

Bill Finger has in past stated his inspiration for Batman. From Batman: The Complete History, [San Francisco: Chronicle Books, 1999, Finger reveals that he:

“further fleshed out the character, whom he saw “as a combination of Alexandre Dumas’s swashbuckler D’Artagnan from The Three Musketeers (1844) and Sir Arthur Conan Doyle’s detective Sherlock Holmes” and wrote countless Batman scripts in the years that followed.

Consequently, Finger also has not explicitly connected Batman’s creation to the Count of Monte Cristo. However, Finger identifies another Dumas work, The Three Musketeers.

So we know that the creation of Batman was based on several inspirations. However, one of those inspirations has not explicitly been revealed publicly to be the Count of Monte Cristo.

This "Real Fact Comic" (which was presumably written by Kane himself, since it has no mention of Bill Finger) has a panel talking about inspirations. The top right panel says this

An avid reader of detective fiction -- young Kane was also inspired by the exploits of true-to-life manhunters... 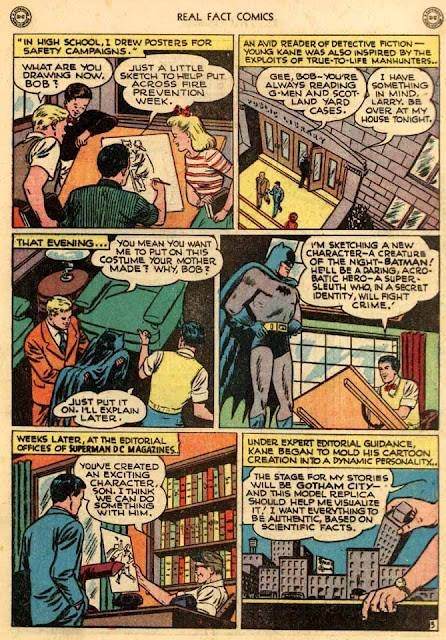 The themes of Monte Cristo aren't terribly unique. A betrayal, the thirst for revenge... these are the fertile ground of lots of stories. The novel is also centered around revenge, while Kane's Batman seems more focused on justice and stopping crime (common themes in the golden age of comics).

Not the answer you're looking for? Browse other questions tagged dc comics batman inspiration or ask your own question.

6
Batman Cartoon Movie featuring Satellite-based Blast
6
What is the difference between Batman and the Batman of Gotham City?
4
Which Batman comic had the Joker trick a man into thinking he was ugly?
16
When did "The Batman" become "Batman"?
4
Are These the Only 5 Fairy-Tale-Based Batman Villains?
7
Was the idea of Batman inspired by vampires?
20
Did Batman ever tell Superman "the last time when you really inspired anyone was when you were dead"?
5
Was there ever an Asian Batman?
72
Do the villains know Batman has no superpowers?