What is the reason for the adornments hidden under the dome of the hemispherical droid prop from A New Hope?

I just watched, for the fist time in many years, The Making of Star Wars, and I noticed something about one of the minor droids. I have always really liked the appearance of the hemispherical droid that the Jawas on Tatooine have for sale (shown on the far right below). 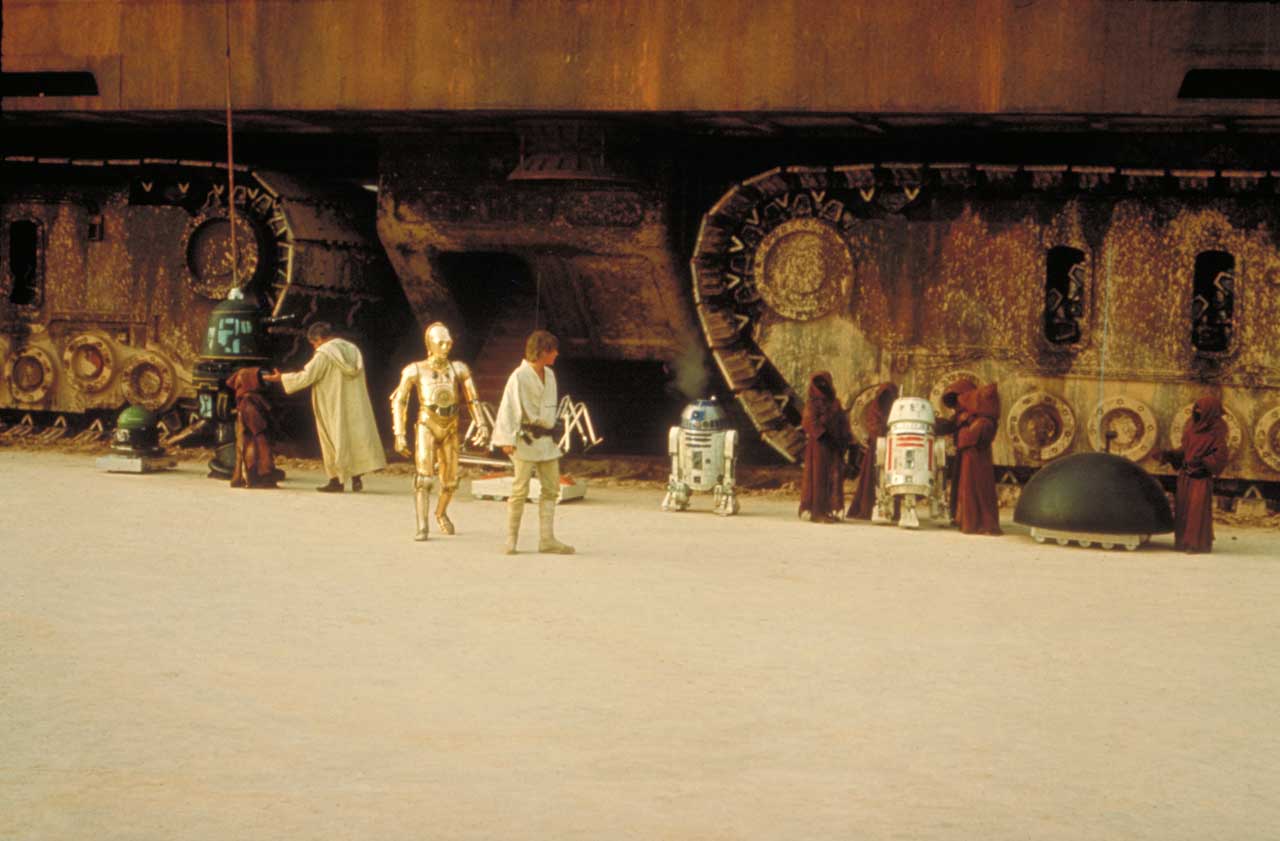 In part, I like it just because it is so abstract. It rolls around, and it has a couple small things protruding from its apex, but we are generally left with no clue whatsoever what its function might be. However, when I watched The Making of Star Wars, I spotted what was located under that hemispherical dome.

Underneath, there is actually quite a bit of decoration, which is obviously never seen when the droid appears with the dome in place. What's the story behind this? Was this a dual-use prop that was, without the dome, going to appear as a different droid elsewhere in the story? I don't recognize that prop from the final 1977 release, but it might be in the background somewhere, or it might be in footage that was shot but not used.

The dome was translucent

This droid appears to be LIN-V8K, a "LIN demolitionmech". By Googling variants of "lin demolitionmech droid inside", I ended up finding an image of its interior schematics from what a forum user described as "an Aussie electronics mag back in the day": 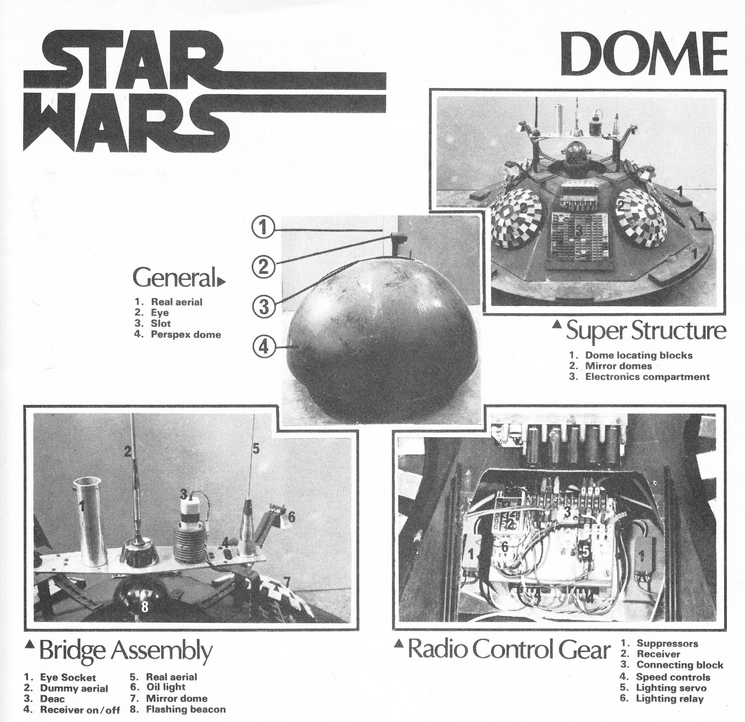 This matches the interior as seen in the behind-the-scenes video, and identifies the functions of the visible pieces, but doesn't explain the more cosmetic-looking pieces, such as the "mirror domes". However, it does provide a possible rationale in the form of the "Perspex dome", a brand name of plexiglass. If this was transparent or translucent plexiglass, the interior would need to be decorated. Supporting this, the fan-made LIN droid from the forum linked above has the "flashing beacon" light visible through the dome: 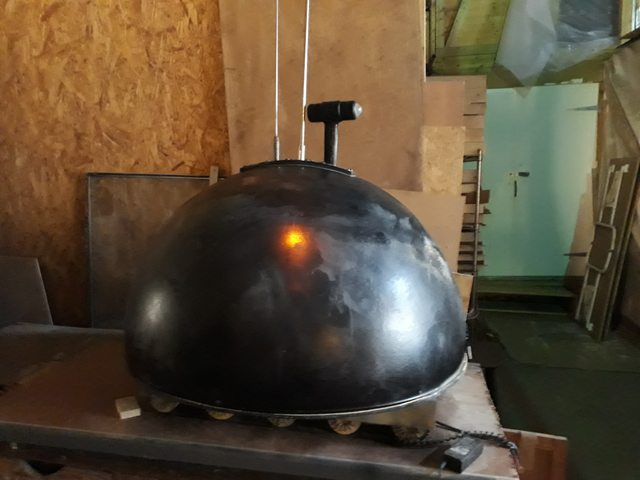 Doing a reverse image search for the article page revealed that this is the December 1977 issue of Electronics Today International, which has a scan here. The article doesn't explain why there's an interior, but does include a transcription of an April 1978 article in Interface Age called "Star Wars Special Production and Mechanical Effects", including an interview with effects pioneer John Stears.

From the interview (emphasis added):

The Dome Robot as seen with the others by The Sand Crawler is really, in my view, the power source for the others to re-charge themselves by. Inside the smoked perspex dome is a rotating solar panel by means of which it collects solar energy and stores it for the other robots to plug in and recharge their own batteries.

Going back to the original making-of video, you can just see one of the mirror squares through the dome as they lower the dome onto the prop: 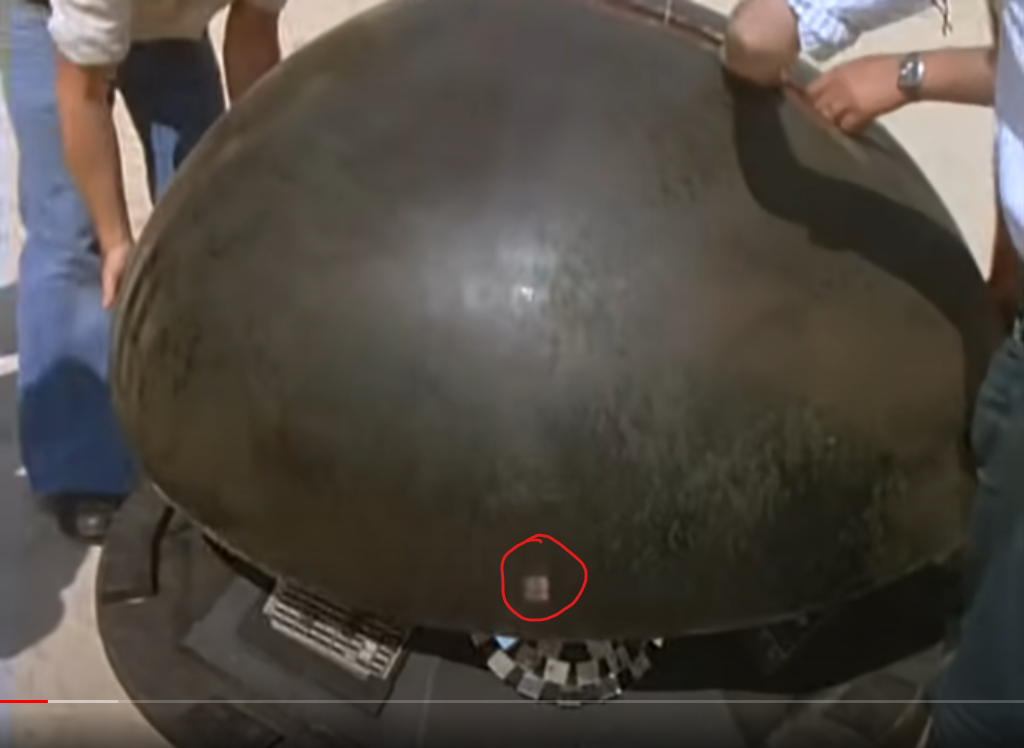 So, it appears that that's the answer - the prop makers added a detailed interior because they thought the interior would be visible onscreen through the dome.

Update: I've confirmed that in the Disney+ version of A New Hope, you can see the LIN droid's lights blinking through the bottom of its dome at 00:18:36.

23
What was the Rebel victory prior to A New Hope?
23
Was the original Death Star prop actually blown up for the movie?
10
What happened after Alderaan blew up in A New Hope?
22
What are the things that “The Force Awakens” borrowed/parallel from “A New Hope?”
12
Does any explanation exist clarifying what happened to the escape pod R2-D2 and C-3PO used at the beginning of the first “Star Wars” film?
0
What are the pilots in A New Hope talking about?
16
Who is this blue headed droid in "A New Hope"?
24
How does R2-D2 — or any astromech droid — routinely get into and out of a T-65 model X-Wing in the timeline of the original trilogy?
10
What happened to the Millennium Falcon hanging dice prop?