His suit is white and blue and it has four side villain that were Elementals.
There was one big villain, I think his color scheme was black and red

This cartoon used to be on Netflix and there might have been a movie about it, but I don't know for sure. 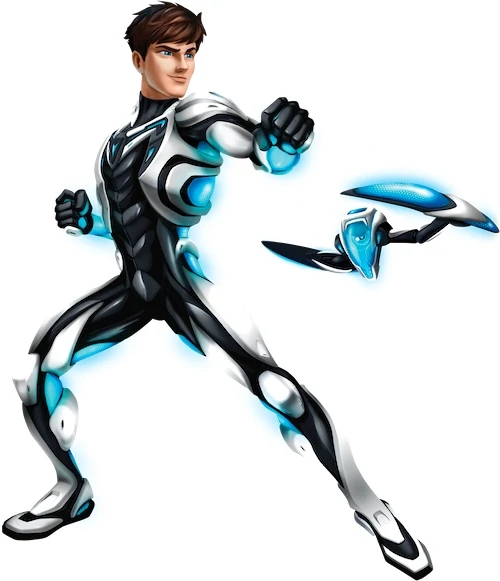 A 16-year-old boy named "Maxwell McGrath" is thrown into a new life when he and his mom moved to a small town called Copper Canyon. There he meets new friends, bullies, enemies, and a lot more. But later he starts to generate a powerful blue energy called "T.U.R.B.O. Energy". Max must now join N-Tek, a top secret organization his father worked on and meets a friendly ultralink named N'Barro Aksteel X377/Steel. When sinister super villains attack Copper Canyon, Max and Steel must link together and transform into a powerful Superhero named "Max Steel!".

The "alien" is called an Ultralink (having seen very little of this, I don't know whether the Ultralinks are really aliens or robots or something else ...).

The superhero wears a white and light blue (and black) suit, images returned from a Google search show a larger, red and black guy who could be a villain.

The series ran for two seasons (the second one first airing on Netflix) and several tv movies, from 2013 to 2017.

How I found this out: at the time I watched a few fragments of this cartoon, but I could not now remember its name; after a few failed Google searches, I remembered there was an associated toy line and I arrived at the "Television series by Mattel Creations" Wikipedia page, and thence at this title.

Not the answer you're looking for? Browse other questions tagged story-identification cartoon super-hero or ask your own question.

4
What TV show is about a teenager who finds a robot and can merge with the robot and transform into different things and fight elementals?

10
Identify a Sci Fi cartoon where they had space suits and would fight in outer space
11
A cartoon/anime with a blonde-haired boy with blue eyes and his father(?), they're looking for 7 gems/diamonds
4
Cartoon with a girl who used boots to help her walk as she couldn't
3
3D cartoon where the MC finds a red robotic arm and it gets stuck on his right arm
5
2000s anime/cartoon where they throw vials that hit a surface and summon beasts