Set in the UK, the story opens with unidentified lumpy parcels on an airport baggage reclaim belt. As I remember it, they become or contain monsters. An armoured train is built to combat the monsters. The train is both solar- and either stellar- or lunar-powered (so it can operate at night). One of the characters cuts a sod of turf from the Manchester United grounds for luck. I can't remember the plot, except an unreliable memory of a bridge having collapsed that they need to repair.

I read this story in the late 90s or early 00s. It was most likely aimed at children, but possibly young adults.

I'm not sure it counts as post-apocalyptic. Britain was overrun with monsters but there was enough civilisation to build the train.

This is The Cockatrice Boys by Joan Aiken.

What does a cockatrice enjoy most for dinner? Anyone it can find.

So the alarmed inhabitants of England discover when a plague of monsters-known as cockatrices-invade their country and begin gobbling them up. They must be stopped! A plucky band of survivors dubbed the Cockatrice Corps- including youngsters Dakin and Sauna-decide to fight back. But how?

A rollicking adventure filled with breathtaking twists and turns, The Cockatrice Boys is Joan Aiken at her comic best.

This review mentions an armoured train.

When England is reduced to a near post-apocalyptic state by a sudden plague of monsters, the military builds a great train to attempt to combat the vicious creatures. Laying track up north, and getting decimated by assorted grotesques at every step of the way, they make their way closer to what may be the source of the problem... Our heroes are young drummer boy Dakin Prestwich and his cousin Sauna, an orphan who's spent the last few years tied up at her aunt's house so that she doesn't break the china. These two kids may be the last best hope of England... 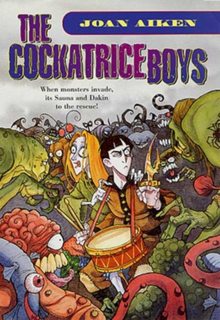 7
A story about a family fighting alongside reptilian aliens
2
Dream Train? Looking for a Book
7
Short story about the last train
5
Finding a book series - monster fighting teen who could lift a car with telekinesis?
2
Anime with teenager fighting huge fish-looking monster that could fly
8
Childrens / YA book - Train travel across alien planet
15
Story about future special forces fighting nano-tech aliens