I have been trying to figure out the title of a book I read about two years ago. It has these animals in it that have been mutated with other animal genes.

In the book, this girl and boy are trying to save these animals because the animals are being mutated with these genes to fight each other. The main animal in the book is a bat/fox. But all the animals in the book include: a dog with eagle wings, a tiger/scorpion, and a lot of other ones.

In the book the scientists who are mutating these animals has also mutated the mayors daughter into a lizard. Then a boy gets his hands on a syringe from the lab and injects himself and then he mutates into a tiger.

Could this be The Battle Begins, first book of the Unnaturals series by Devon Hughes? 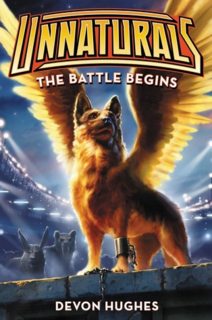 Castor has always been a stray, prowling with his pack in the back alleys of Lion's Head. That is, until the day that he's captured and taken to a dark laboratory full of terrifying creatures. They're called Unnaturals, and they're made to fight.

Soon Castor is transformed from a mutt into a powerful beast with huge eagle wings—and he's thrust into the fighting ring. He knows he'll need all of his courage to survive. But it will take unexpected human and animal allies and something even more than courage for him to save the Unnaturals....

Castor and his brother Runt are living with their pack on the ground level of a society where the air and environment has become poisoned enough that the well-to-do live in the sky. Marcus is one of these people, living with his parents and enjoying watching the Mega Monster Mash-up tournaments that have become popular. Even though his older brother, Pete, works as a medic for the animals, he thinks that these are virtual fights, and that the animals are not real. Leesa, however, knows differently-- her chihuahua, Pookie, was stolen and turned into a chihuahua/spider mix who fought in these televised battles. Castor also finds out how real these events are after he is stolen from the streets and experimented on until he becomes a dog/eagle mix and starts to train for the fights. Living alongside creatures like octopus/elephant mixes, Castor has to decide if he will turn into a killer or remain true to himself. With the help of the humans, the animals investigate ways that they might be able to break free for the horror of the games and make it to the elusive Greenplains.

14
What novel series has a young boy travelling across space with librarians and a bat-like dog?
10
Short Story about a boy and a dog, where all animals can talk
6
Trying to find a book about aliens taking over earth and making us fight with them
7
Need help finding a Fantasy Book with a sword wielder and sight sharer
4
Trying to find an old book about a "multiple-personality" boy
17
Sci-fi book where a mutated insect's bite in space colony grants superpowers
10
Novel about genetically engineered bacteria that causes hallucinations?
7
Young Adult series/trilogy about nefarious plot to transfer memories from rich people with disabled/dying bodies to young donor bodies
2
Book about a genetically engineered virus that causes prion disease