Book with fire monster, alien girl and dog, and corvette?

Anyway, here's a bunch of the plot. If you've read this book, you should be able to tell what it is. (?) indicates possible inconsistency.

Plot as far as I can remember, mostly in order (I think):

Anybody got ideas? I'm a bit stuck.

I'm not 100% sure it's a match, but there are a lot of similarities with the 1996 Dean Koontz novel Ticktock. (Note the novel actually says "Dean Koontz" instead of "Dean R. Koontz.") 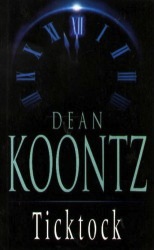 Quoting the plot summary on Wikipedia:

Tommy Phan is a first-generation Vietnamese American in southern California, a successful detective novelist whose greatest ambition is to live the American Dream. The story opens with Tommy getting a new Corvette. He argues with his mother, refusing her offer for dinner. In a fit of rebellion, he eats two cheeseburgers, something his mother dislikes. He meets a blond waitress there (whom he will meet later in the story again). His radio quits working during one of these two trips, and in the static are eerie voices.

Once home, he finds a Rag doll on his front steps, along with a note, written in Vietnamese, which he knew when he was a child but has forgotten in his quest to be a true American. After taking the doll into his study, it soon bursts open to reveal an evil creature who seems intent on killing Tommy. A message is left on his computer screen saying he has until dawn, but what will happen at dawn, Tommy does not know. After fate brings a meeting with Del, a woman who appears to speak somewhat cryptically, they embark on a race to flee the creature. She believes him too quickly, and often has mixed stories for all of her abilities. (At one point she stole a car, saying one minute she hotwired it, and the next that the key was in the ignition.)

The doll appears to be growing larger as their journey continues. They visit Tommy's brother, Gi, to try and translate the note. They then go to Del's apartment, where we learn she's quite rich, but is a waitress anyway. She also shows another side to her when Tommy wants to see her paintings, and she threatens to shoot him if he does. Her dog seems incredibly smart, something that unnerves Tommy.

In their journey to escape the ever-growing doll, Tommy's Corvette is trashed, two cars are stolen, and one large boat is trashed. They arrive at Del's mother's home, which seems utterly odd. They claim to be able to listen to live stuff from the past with their radio. Del's mother shows an uncanny sense of time when she knows exactly when the rain will stop.

Gi calls and tells Tommy to go to their mother, and not to bring the blonde along. Tommy brings Del along anyway, where he then learns the doll was conjured to scare him back home by a friend of his mother. They begin a ritual that, after a few harrowing minutes, completely dispels the monster.

Tommy sees Del's paintings and they're of him. She had remotely viewed him over the past 2 years because she knows he is her destiny.

He and Del get married in Vegas. Then they go back to their normal town.

10
Short Story about a boy and a dog, where all animals can talk
7
Book with glowing green liquid that keeps injured teenage girl alive
9
Movie with teenage alien girl living on Earth
4
Book: Orphaned girl. fire, dancer/acrobat, grandfather, backwaters, wolves, werewolves?
6
A fantasy adventure book based on Old Greek Myths and Medusa
6
Fantasy book: redhead girl talks to animals, is made to stay with her noble father, discovers she's part of a phoenix rebirth cycle
5
2000s(?) anime: a girl uncovers a government secret and can control a phoenix-like monster
5
90s anime with a kid running away in a sewer with his two-headed dog, Cerberus