YA book, maybe through Scholastic, girl transported to fantasy world to save princesses, helped by dwarf

I know I've found this book before. I read it somewhere in the late 1980s to the early 1990s. It was short, maybe 30 pages or so, and involved a young girl on the bus, on her way to school, who I think has to write a story for an assignment, but can't think of anything. While looking out at the trees, they start to look a bit strange, then she suddenly realizes she's in a carriage. When it lets out, she's in a medieval fantasy world where she is destined to help retrieve the royal family who have been abducted by magic. She's helped out by a dwarf who is also the court jester. I remember she acquires a magic rope (I want to say that it's bright yellow) that's highly elastic and one end can magically stick to a surface, which she uses to get through a window. She's attacked by flying monsters during the story, who I think turn out to be the missing princesses, with the dwarf being revealed to be a transformed prince. At the end of the story, she's sent back on the same carriage, and suddenly finds herself on the bus, unsure if she dreamed the whole thing, but also happy that she has her story to write.

The cover was done in a semi-realistic style (it didn't look like a photograph, but it was not cartoony) with the girl (maybe in modern clothes) standing in a stone-walled place with the dwarf more in the foreground, in mid-caper, while one of the flying creatures seen through the window in the background, or maybe in the middle of attacking the girl, who is fending it off.

After the word "harpies" popped into my head for the flying creatures, I did a search for fantasy novel girl princesses harpies dwarf and it came up with a familiar cover for The Seventh Princess by Nick Sullivan, published in 1983 by Scholastic. 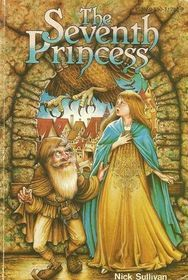 When her school bus becomes a princess's carriage, Jennifer finds herself transported to a strange place where she is the Princess Miranda, the next victim of the evil Duke Rinaldo.

This review has a bit more fleshing out:

Jennifer is on her way to school looking out the window at the forest, daydreaming when suddenly she is inside a horse drawn carriage, taken to a palace and everyone is calling her Princess Miranda. She quickly makes friends with the dwarf Jester, Samson, and it doesn't take her more than a few minutes to realize that the High Chancellor is an evil man. She finds out that her fate here is doomed, but also that the fate of Elandria itself is in peril and she is given the secret on how it may be possible to save not only herself but the whole country from evil.

The "yellow rope" was apparently used by Samson, not Jennifer.

He looked again at the smooth yellow rope. It was amazing stuff. Soldiers had used it in the olden days, Prospero had said, when wizardry was stronger and such articles were commonplace. It would stick to anything, but it was made especially to stick to cold stone. There was nothing like it for storming an enemy castle or for scaling a cliff. You just tossed up one end and it would stick fast and bear as much weight as the rope itself until you willed it to let go.

Samson had hardly believed it would work, even when he threw himself desperately into the empty air as the harpy Julia crossed the outer parapets of Swenhild's castle, flinging the grapple-cord at the stone wall as he fell. Yet it had held, and the natural stretchiness of the rope had taken up much of the shock as he was suddenly brought up short at the other end. Then it had been a simple, if nerve-wracking, matter of working his way to a window, climbing hand over hand along the rope.

The book was longer than I remembered, 107 pages.

5
A book about a girl who goes through a mirror to Atlantis
5
Looking for a fantasy book about a girl who could talk to cats
8
Fantasy children's-book, young girl with fey parentage, a few memorable descriptions
6
Kids Book series - Girl babysits a family of monsters
4
Looking for a book/novel with a girl who is transported to a world with only animal type humans
4
Manga where the MC is a saint and transported to another world with another girl but is cast aside and almost killed
6
YA Book involving a girl who acquires a book of mystic lore, trapped in alternate world with scarecrows, saved by her mother's watch