Sci-fi short story about a man visiting relatives on a ranch, but finds they have been captured by creatures from another dimension

The protagonist is a young man visiting his Uncle (or maybe Father) on their ranch and discovering that they have accidentally established a portal to another world, the inhabitants of which are now preparing to invade and conquer our world.

Was around 20 years ago that I read it. My sense was that it was probably 50's/60's vintage, but could have been older. The portal was opened as part of an experiment by the Uncle/Father, who I believe was a physicist. The protagonist was visiting on a holiday break from college. It was winter with snow on the ground. The aliens were of evil intent and were able to exert mental control over humans and animals (wolves) to help them establish the portal. There was a love interest - a pretty cousin who along with her father was under alien control. 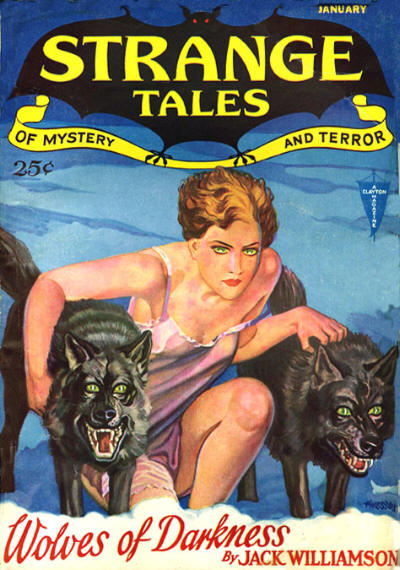 It's winter and there is snow on the ground:

Involuntarily, I paused, shuddering, on the snow-covered station platform. A strange sound, weird, and somehow appalling, filled the ghostly moonlight of the winter night. A quavering and distant ululation, which prickled my body with chills colder than the piercing bite of the motionless, frozen air.

The narrator, Clovis McLaurin, has been urgently summoned to visit his father at his ranch in Texas:

It was three years since my father had left the chair of astrophysics at an eastern university, to come here to the lonely ranch to carry on his original experiments. The legacy from his brother Tom, besides the ranch itself, had included a small fortune in money, which had made it possible for him to give up his academic position and to devote his entire time to the abstruse problems upon which he had been working.

Three days before, I had received the telegram from my father. A strangely worded and alarming message, imploring me to come to him with all possible haste. It stated that his life was in danger, though no hint had been given as to what the danger might be.

Dr. Jetton, like my father, was a widower. He had a single child, a daughter named Stella. She had been spending several months of each year with them on the ranch. While I had not seen her many times, I could agree with the station agent that she was pretty. As a matter of fact I had thought her singularly attractive.

And here is what she told me, in that tiny, toneless voice. I have condensed it somewhat, for many times her voice wandered wearily, died away, and I had to prompt her, question her, almost force her to continue.

'My father came here to help Dr. McLaurin with his experiments,' she began, slowly, in a low monotone. 'I did not understand all of it, but they sought for other worlds besides ours. Other dimensions, interlocking with our own. Dr. McLaurin had been working out his theory for many years, basing his work upon the new mathematics of Weyl and Einstein.

'Not simple is our universe. Worlds upon worlds lie side by side, like the pages of a book — and each world unknown to all the others. Strange worlds touching, spinning side by side, yet separated by walls not easily broken down.

'Dr. McLaurin knew by mathematics that these other worlds must exist. It was his wish to explore them. Here he came, to be alone, with none to pry into his secrets. Aided by my father, and other men, he toiled through years to build his machine.

'The machine was finished. And through its great copper ring, we saw another world. A world of darkness, with midnight sky. Loathsome, lividly green plants writhed like reptilian nonstrosities upon its black hills. Evil, alien life teemed upon it.

Dr. McLaurin went through into that dark world. The horror of it broke down his mind. A strange madman, he came back. His eyes were green and shining, and his skin was very white.

'And things he brought back with him — clinging, creeping things of foul blackness that stole the bodies of men and beasts. Evil, living things, that are the masters of the black dimension. One crept into me, and took my body. It ruled me, and I know only like a dim dream what it made my body do. To it, my body was but a machine.

'New to our world were the black things. Light slays them, for it is a force strange to their world, against which they have no armor. And so they dug a deep place, to slink into by day.

'The ways of our world they knew not; nor the language; nor the machines. They made Father teach them; teach them to speak; to read books; to run the machine through which they came. They plan to bring many of their evil kind through the machine, to conquer our world. They plan to make black clouds to hide the sun forever, so our world will be as dark as their own. They plan to seize the bodies of all men and animals, to use as machines to do that thing.

The "accidental dimensional portal" occurs in Beachhead Planet (1970) by Robert Moore Williams. There is also a (sort of) ranch, but it's inside a reconstructed touristic Far West town.

The invasion theme is also present, but that's too common a trope for this to be significant.

No father or uncle, though.