Coming-of-age/portal sci-fi book about a teenage girl and her younger brother, who are transported to another realm and have to complete a quest [duplicate]

Ask Question
Asked 11 months ago
Modified 11 months ago
Viewed 95 times
7
This question already has an answer here:
80s book similar to Narnia but with a more Celt feel, allusions to Finn MacCool and eating "the salmon of wisdom" (1 answer)
Closed 11 months ago.

Definitely a long shot, but I remember reading this book in the late '80s or early '90s.

It was about a teenage girl and her younger, early-teens brother, and they somehow got transported to another realm. In this realm they have to complete a quest, and maybe she has magic powers now (?). I seem to remember the brother picking up ground fighting and/or sword skills as this quest unfolds.

And the only part I can remember is how it suddenly occurs to her (much later in the book) how much her brother has changed, that he's grown taller and his jeans and shoes don't fit anymore, and he's shed his babyfat and has basically sprouted into a young man during this quest.

It may have been published in the 1980s. I would give my kingdom to find this book again. LOL Thank you!

This might be The Wizard Children of Finn by Mary Tannen as per 80s book similar to Narnia but with a more Celt feel, allusions to Finn MacCool and eating "the salmon of wisdom". 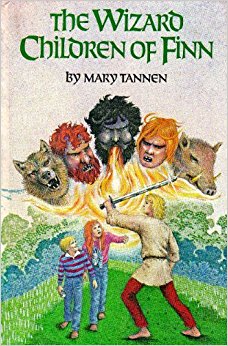 Near the end of the book does have Fiona realizing that Bran has shed much of his baby fat.

Bran stood before the fire. With everyone sitting down, he looked much taller than he really was. Hiking through the woods for a couple of weeks had gotten rid of the baby fat. His face was harder, more boy like.

She doesn't have magic powers in the first book, but picks up a few in the sequel, which also has her realizing that

her mother previously traveled to this world, and Finn is her father.

10
80s book similar to Narnia but with a more Celt feel, allusions to Finn MacCool and eating "the salmon of wisdom"
5
Young Adult novel - Brother and Sister go back in time and meet Cuchulain