The protagonist is a warlord, who gains intelligence by consuming others of his species, which are reptilian. He works in a mine where he kills others and slowly gains power.

The planet is just grass because they have killed all other lifeforms. They breed by dropping sperm into the grass mindlessly. They hunt their young, which are dumb animal-like creatures that graze on the grass, and then eat them alive.

The screams of the "food" enhance the meal. There are some sort of games which are broadcast, and there are alien civilizations outside the planet. Possibly dogs are one of them?

Read an old paperback about 2006. It was possibly one in a series.

The book is Kren of the Mitchegai by Leo Frankowski and Dave Grossman: 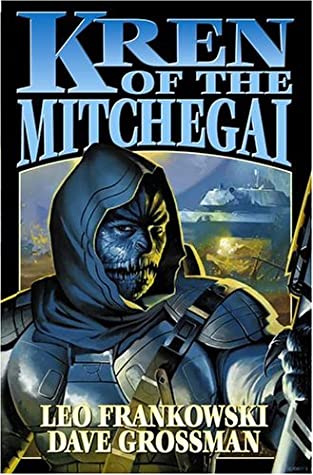 First, the involuntary colonists of New Kashubia rescued their planet from crushing debt by becoming virtual reality mercenaries, then they successfully revolted against the oppressive government of Earth, but now they are menaced by the Mitchegal, a species whose biology has made them inherently evil. The carnivorous adults lay and abandon vast numbers of eggs, some of which grow into vegetarian juveniles, which are the adults' only food supply. Their culture has no family life, they eat only meat, have nothing like sex, and their main pleasures are gambling, art, and killing each other. They are an ancient civilization, millions of years old, with thousands of densely populated star systems in their realm. Lacking an immune system, they must completely sterilize any planet before they colonize it. The region of the galaxy they occupy is rapidly expanding...and Human Space is their next frontier!

It is part of a series as you remembered. It's the last book in the New Kashubia series. The protagonist is Duke Kren. He starts out as a slave in a mine and every time he dies and is eaten his brain cells take over the person who eats him and he is reborn in a more intelligent state. He kills and eats a guard, but he finds if he only eats part of the guard's brain he can get the guard's knowledge without being taken over by the guard's brain cells. In this way he becomes gradually more and more intelligent and eventually becomes Duke.