I've been fleshing out the unseen or unacknowledged ranks and rank insignia of Starfleet. 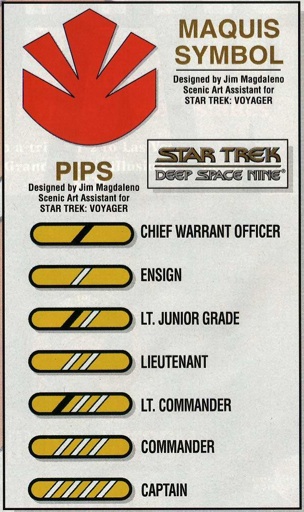 The writers played very fast and loose with O'Brien's rank, and even in the TNG episode where he's established as CPO he still wears lieutenant's pips. In TNG he eventually starts wearing a single black pip like a few other one-off characters, but because his rank was so all over the place back then I'm willing to accept this was still a costuming error. It's not until DS9 that they really settled on his rank and gave him a unique dedicated insignia.

The clincher for my theory is that, allegedly, early script notes for DS9 (while O'Brien was still wore the black pip) call O'Brien a Warrant Officer. This piece of trivia is upheld across several wikis and fan-forums. However I can't find any basis whatsoever for this claim.

Does anyone have proof these notes exist?

In a word, no. O'Brien's rank may be inconsistently presented, but it's consistently not 'Warrant Officer'.

There's a script database here and a search through it reveals zero script mentions of 'warrant officers', mainly because that's not a rank that exists in the Star Trek universe, other than occasional canon muckup.

Since I posted this question I contacted John Chase, writer of the fantastic Starfleet.ca blog and expert in TOS costuming.

He directed me to a reproduction of a 1998 interview with principal costume designer for TOS and TNG, the late William Ware Theiss. The reproduced article can be read here, on the Star Trek Prop, Costume, and Auction Authority website.

In it, Theiss described the creation process for TNG's early season Starfleet uniforms, clarifying details about the ranking system used in the show.

"The rank on the old show was a braid we had custom-made and was based on our current naval ranking. But the new rank are these little gold circles, and black circles with a gold rim."

The TNG ranking system as established by Theiss is as follows... 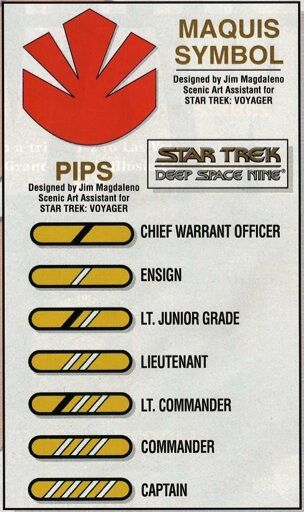 So why did O'Brien wear the pip of a Chief Warrant Officer? My answer for that is, just like his many other costuming and character contradictions over the years, the people making the show just hadn't thought that hard about it. It wasn't until midway through DS9 that O'Brien finally received his own unique insignia for Chief Petty Officer or Senior Chief Petty Officer, and even then they made mistakes there too.

Not the answer you're looking for? Browse other questions tagged star-trek star-trek-tng star-trek-ds9 star-trek-voyager star-trek-uniforms or ask your own question.

8
Are there Warrant Officers in Starfleet?

8
Are there Warrant Officers in Starfleet?
2
Why is there no consistent Chief Helms Officer in TNG?
5
Is there a minimum ranking a Chief Medical Officer on a Starfleet Starship needs to be?
19
Why is Worf always called by one name?
10
How did Worf's adoptive father know O'Brien's rank?
12
Why are there so many Chief Engineers in Star Trek: The Next Generation?