What is the first work to base Hogwarts uniforms on modern school uniforms?

The text of the first Harry Potter book describe the school uniform as a black robe with a black cloak, a hat, and dragon hide gloves when hand protection is needed, and I think that's pretty cool. The movies showed a boarding school uniform with a robe on top, and I think that's pretty cool too, because it visually calls attention to the mixed genres of the series. What was the first official wizarding world work to have a Hogwarts uniform style based on modern school uniforms?

I know there won't be a clear line between fully medieval witch robes and full uniforms with trousers or skirt, sweater vest, collared shirt, and color-coded tie. I think that this can be approximately as exact as any other history-of questions.

In this collection of American chapter art, the first obviously school-uniform based outfit is in 2005 with a V-neck jumper, collared shirt, and possibly a tie. In earlier books, Harry usually wears a shirt with one wide stripe across, and I'm not aware of that being a school uniform look. It doesn't look like anyone else wears that type of shirt.

This French cover art counts, and if I'm not mistaken, it was printed in 2003.

Ergo, we should conclude that the first book in the series, The Philosopher's Stone is the first to depict 'modern' school uniform. Or we must redefine what is meant by 'modern'.

The details on school uniform in Britain are taken from this Wikipedia page.

But you are saying, "these are all for university students, and mostly optional or only worn on certain days!"

Fret not, there still at least some private boarding schools in Britain that have a Hogwarts-esque uniform: 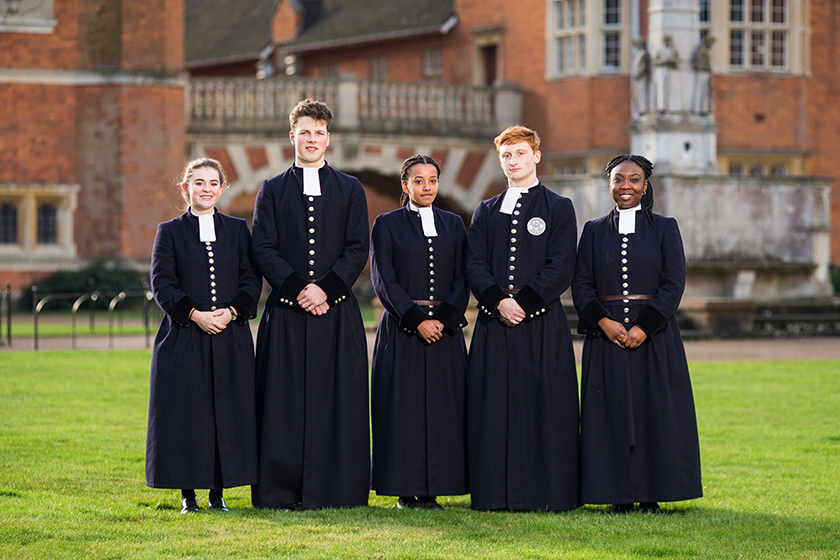 The Tudor school uniform consists of belted, long blue coats, knee-breeches, yellow socks, and bands at the neck. The uniform has been in place since 1553

And there was an update (albeit for girl students).more recently:

A complementary uniform was introduced for girls on re-unification of the schools in 1985. This consists of a knee-length pleated skirt, summer jacket, yellow socks (for the boys and junior girls), and grey socks or grey/black tights for senior girls, as well as the long coat in winter, and the bands.

Now, maybe you don't consider 1553 modern enough, but it is still worn today, I would argue that makes it modern.

Even then, button up shirts with collars have existed for centuries, are they modern?

The history of School Uniform in England, shows that uniform wasn't adopted, uniformly, til some time around the late 1800s or early 1900s.

The appearance of a uniform at most schools was slow to develop, and was rare before the beginning of the 19th century.

So the idea that Harry Potter and pals wearing robes is out of place for the 1990s is really not accurate; we could easily have been told a non-magical story about the Boy Who Lived going to school at St Brutus's Secure Centre for Incurably Criminal Boys and still see him wear robes and the like.

Not the answer you're looking for? Browse other questions tagged harry-potter history-of hogwarts adaptation-comparison inspiration or ask your own question.

55
How does the Hogwarts Headmaster know whom to invite to school?
13
What was the first school of magic mentioned in modern Fantasy literature?
6
What type of school is Hogwarts?
4
What did Philip José Farmer base "The Nine" on?
4
What protection does Hogwarts have at the school entrance?
21
What sort of people are the Hogwarts school governors?
15
Do the Hogwarts uniforms reflect one's House membership?
22
Who was the first sci-fi/fantasy character to be betrayed by their cape?
12
Can supremacist Purebloods (like the Malfoys) be seen wearing Muggle clothes in the books?
5
How do Hogwarts passageways work?