Evangelion Thrice Upon a Time do people still remember what happened? Is the world rebuilt upon the old ruins?

In the end the choker still exists. That looks more like a bomb not a necklace. I want to know for sure if people who are back still remember what has happened before the Impacts and EVA, or if the new world is built upon existing ruins of the old one. It seems the Human Instrumentality Project only changes human and souls, not the physical structures of the world like buildings or streets or cars or trains.

From what I have been able to piece together from this series, is that it is highly convoluted.

[Spoiler Warning: I have not edited in spoiler captions, because that would basically make this entire answer a spoiler.]

Firstly I'll address the choker, as that is what your question focusses on. The choker is a symbol that represents a link to the universe of Evangelion. Why is it still there at the end? Well, let's get into it...

The one thing that we can confirm is that the "time loop" exists. This has been a long running theory that has had some support over the years, from small aspects; i.e. the beginning of Evangelion Neon Genesis, and the Rebuild series are exactly the same, apart rom the fact that the sea is red; a very distinct difference. In the original series, the only area of ocean that was red was the north pole where the Second Impact occurred whereas in the End of Evangelion, the entire world is destroyed, and by extension the entire ocean is turned red. This is then shown in the beginning of the Rebuild.

There are different Characters/Clones except Shinji

This is where things get very confused. The two characters I will focus on are Asuka, and Kaworu.

Towards the end of the movie, they hint that Eva pilots are all clones. The Asuka in the Rebuild is a different iteration of Asuka that was left on the beach at the End of Evangelion. This is point out by a small but very distinct detail about the two Asukas: on her Plug suit, Asuka Langley Sorhyu has little black rectangles on the collar, whereas Asuka Shikinami Langley has diamond shapes in the same place. 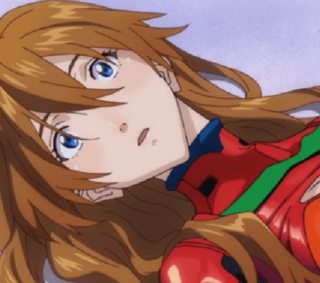 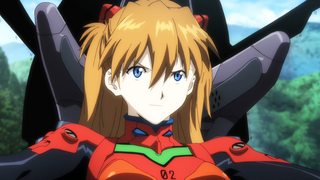 Shikinami Langley, toward the end of the movie suggests an awareness that she is a clone, but nothing is suggested as to why there is a need for clones. One might say that it could simply be due to the highly complex synching between a pilot and its Eva, so in the case that one Pilot dies, a clone can replace them. This is exhibited entirely through Rei in both series; but it is also suggested that Rei's cloning is entirely different to the rest of the Pilots.

One suggestion is that the cloning is a "backup plan" in case the events of the Human Instrumentality Project go awry, and the events need to be done over. However, it is not entirely clear if, even though she is aware that she is a clone, that she is aware of the Loop itself.

Kaworu on the other hand has one very distinct line:

If anything, this alone shows an awareness of previous events. However, being the Incarnation of Adam (there are mentions of him being the First, and Last Angel in relevance to his interaction with the Loop) as well as a mention of him putting his name with Shinji's when he wrote the Dead Sea Scrolls - implying some kind of singular event involving the two. Additionally, during the montage of Shinji interacting with all the others in the series (Asuka on the beach, Rei trapped in the spirit of Unit 01, etc.), Kaworu shows the casket(s) he woke up in, showing that he is the only one to wake up in them - each one contains him, to be woken up in each Time Loop; seemingly indefinitely, until the loop is broken.

The reason that Shinji is not a clone, is because he is aware of everything that has happened up until this point. The most prominent example being Asuka, left on the beach from the End of Evangelion. That said; the events of Evangelion are very likely something that he made up in his own head.

The common theme that Evangelion revolves around is Shinji, and his relationship with his Father, after the loss of his mother; coming to terms with his grief, and dealing with it in several ways. The final episodes of the Original Anime show a healthy outcome (Shinji realises that his mental state has clouded and poisoned his beliefs that he is a "worthy human being"), the End of Evangelion shows a very unhealthy outcome (he succumbs to the pressure and believes that he is a victim that no one cares about), and the Rebuild series has a very different outcome again (that he needs to realise the cause of his issues, i.e. his relationship with his father, which was caused by the loss of his mother tearing them apart and making him feel worthless).

At the end of 3.0+1.0, Shinji removes all evidence of Evangelion from the world, and the scene changes to a slightly older Shinji, sitting at the bus stop. Rei, Kaworu and Asuka sitting on the opposite platform. This suggests two things:

Evangelion is an expression of Hideaki Anno's dealing with Depression

To focus on the idea that Evangelion is a creation of Shinji's mind, as an escape from reality to deal with his issues, this is very much what Hideaki Anno did with the series. Characters in the series are based on those in his own life. Even so far as to express his own developments in to the three endings of the series. The first being his own overcoming of his depression, the second being the effects of the retaliation he recieved for said ending, and the third potentially being the a new way that he has come to terms with his issues.

This is why (I believe) the end of the movie pans out into a live action shot (and, correct me if I'm wrong, why the original cuts had the dark live-action intros), as well as the seemingly "real" Rei that emerges from the event horizon of the Final Impact. This is where the imaginary collides with the real, and when Shinji and Gendo enter the Anti-Universe, their fights start to destroy the "sets". Walls are pushed away, lights are knocked over, building are pushed aside and tumble like nothing more than cardboard boxes. The metaphors for the fake scenery are actually showing that the "illusion" or the "imaginary world" of Evangelion is beginning to come apart.

Mari is the catalyst that breaks the Loop

The only outstanding character to all of this, and potentially the most influential and most confusing is Mari Makinami Illustrious. Mari is the outlier to the rest of the Evangelion iterations, only being seen as a coworker to Shinji's parents (apparently being the one that introduced Yui and Gendo in the world of Evangelion), therefore implying she is the same age as them; but at the end of the movie, she seems to be the same age as Shinji. In addition to this, she seems to have in intimate knowledge of everything to do with NERV, WILLE and SEELE, shown by her interactions with Fuyutsuki.

At this point, I can only speculate as to what her role is in the story. It might be that after several iterations through the story in Shinji's head, he met with Mari, who has had a very different, and very impactful influence on him, allowing him to finally move on from the events he was dealing with. It is possible that she was included in the adventures in Shinji's "Evangelion stories", and had a proper understanding of what they meant, hence her "interaction" with the DSS Choker, as well as the line with the (odd) follow-up of smelling his neck

"The smell of an adult."

The only supporting evidence I have of this is the first interaction Shinji has with Mari, when she crashes into him on the roof of the school (at this point in time I don't know if this is actually in the movie or not)

In another storyboard, Mari would have pushed up her glasses in the same manner as Gendo.

This apparent behaviour could be a trigger for Shinji to connect with Mari psychologically, in the same way that he is constantly attempting to seek his father's approval, but then developing a much healthier relationship with Mari, than he does with his father.

So with all that taken into account, and with the fact that this extremely deadly and dangerous collar is just taken off and put in her handbag and disregarded as something harmless, it's very likely that it isn't actually anything more than an anchor for Shinji and this world he made up in order to deal with his issues. This is a fairly common thing in real life, where people attach their trauma or coping mechanisms to an object. Sometimes when people are stressed, or anxious, or depressed, they need this item in order to deal with their issues.

Without more information from the Director/Writers however, this kind of speculation is most likely the best we're going to get.

1
Is the "time loop" in Evangelion canon, and if so, what causes it?