Why are Invisibility and Force Fields coupled together in certain super heroes?

Violet from the Incredibles and Sue Storm from The Fantastic Four are both heroins whose power is both to become invisible and to create force fields. Now, maybe Violet is an homage to Sue Storm but, if she isn't, why is it both of them have these two powers coupled together? Is there some significance to the two powers being in the same person or, is one of them a byproduct of the other?

In Sue Storm's earliest appearances, her sole power was the ability to turn herself invisible. She couldn't turn other people or objects invisible, and couldn't project force fields either. Stan Lee said he was trying to think of four powers that were totally different, and that he didn't want Sue to be strong or punch people, since she was a girl.

As for the Invisible Girl, she's a girl, so I didn't want her to be strong. I don't want her to be Wonder Woman and punch people. So what power should she have? I figured, "Gee, what if she's invisible?" I knew there had been invisible people. There was The Invisible Man, the movie with Claude Rains. All I was trying to do was think of four powers that were totally different.

It wasn't until Fantastic Four Vol. 1 #22 that Sue gained the ability to turn other people and objects invisible, and project force fields as well. Apparently, Reed theorised that Sue's invisibility was a form of energy, and that with practice, she could learn to control and utilise that energy for a wider variety of effects. 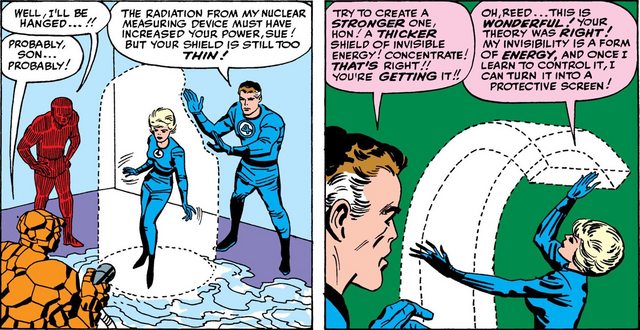 Speculating here, but I imagine this was also a way to make Sue more powerful and proactive, while keeping her abilities distinct from the other members of the team. In her earliest appearances, she was clearly the least powerful member of the team, and played a relatively passive role in fight scenes. Whereas, by the time of John Byrne's Fantastic Four run in the early 1980s, she was clearly the most powerful member of the team.

As for Violet, it always seemed obvious to me that the Incredibles drew heavily on the Fantastic Four for inspiration, and that Violet's powers specifically were inspired by those of Sue Storm. However, Brad Bird has denied this, suggesting that he came up with his ideas independently. According to him, he gave Violet the powers of invisibility and protective shields, because teenagers are "insecure and defensive".

MICHAEL BARRIER: I've been astonished by how precise the parallels have been that some people have drawn between the film and certain superhero comic books, like Powers, Watchmen, and Fantastic Four. I gather from other interviews, though, that you really haven't been that much of a comic-book reader, and really haven't been consciously influenced by these comic books. What kind of feedback have you been getting from fans about these supposed influences, and how have you been responding?

BRAD BIRD: I was not a big comic-book reader. I read a few, when I was little, but I was really much more into things like "Peanuts" and "B.C."—funny strips. I got my heroes secondhand, from television and movies, to a certain extent. When fans ask if I was influenced by issue 47 of Whoeverman, I have no idea what they're talking about. I'm perfectly willing to believe that I'm not the first to come up with certain ideas involving superheroes; it's probably the most well-trod turf on the planet. If there are similarities, it's simply because the same thoughts that occurred to other people also occurred to me. I'd be astonished if anyone could come up with any truly original powers that were at all interesting any more.

That's not the part of the story that I'm interested in, anyway. The part that I'm interested in is all the personal stuff. I tried to base the powers on family archetypes. The father is always expected to be strong, so I had him have strength. Moms are always pulled in a million different directions, so I had her be elastic. Teenagers are insecure and defensive, so I had her be invisible and have protective shields. Ten-year-old boys are hyperactive energy balls, so I had him be speed. And babies are unknown—they may have great powers, they may have none.

Not the answer you're looking for? Browse other questions tagged marvel super-hero powers fantastic-four the-incredibles or ask your own question.

37
What inspired the Incredibles?

6
Are female super heroes often referred to by their common names?
5
Are there any heroes/villians with only super weaknesses?
13
Why are heroes without supernatural powers considered “super” heroes?
10
Are White Walkers sentient beings with certain super-powers? If yes, what are their powers?
10
Why did Miles Morales get non-spider-like powers (bio-electrokinesis and invisibility) that are vastly different from the other spider people?
2
Kindle superhero series including an army guy in powered armor, a self-aware robot, and a teleporting thief
10
Movie or TV show with super heroes, dinosaurs and portals