So the plot was somehow like this: a guy was uploaded to, I think, an android body. Then, he is sent out to scout for a new habitable planet. Following this, I think a lot happened (I can't clearly remember), where he keeps returning , but in the end they set out on a lot of ships. There is a problem, I think involving the US president (or someone else) who also uploaded himself to gain immortality, but something had gone wrong with his upload and he had gone nuts, wanting to abduct women with his cohorts to make a slave harem. That is all I remember from the plot of the first series other than that there was something about an alternative him from the future to save his mission, to save humanity, or something

There was a second series about him. Where he awakens after being deactivated after being reuploaded in a cloned bio body, but here the banger is that it's really damn far in the future and humanity has gone its course. In these books he somehow has to care for siblings (1 girl and 1 boy as far as I remember), and these two are part of a special species with special powers for which they had been hunted.

This is the Forever series by Craig Robertson. The follow up series where he has to protect the children is the Galaxy on Fire series. 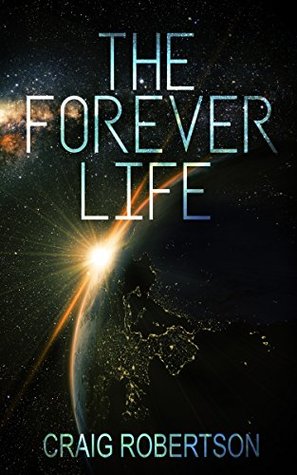 Immortal, alone, and broken. To live forever, love must die. Major Jon Ryan is a cocky fighter pilot turned astronaut. He volunteers for the most ambitious, desperate mission ever conceived. The planet Jupiter, thrown off orbit, will destroy Earth in less than a century. Project Ark is humanity's only hope for survival. Jon will search alone to find a suitable location for human resettlement.

To be able to do this, he must first have his consciousness transferred into an experimental android host. He understands the implications of his mission all too well: He will not age and by the time he returns home all the people he knew will be dead. His only companion on his fifty year voyage is his ship's irritable AI.

Jon not only pushes the extremes of human technology, but the limits of his psychological strength. As time goes by, all communications with Earth gradually cease, leaving him in an eerie silence with more questions than answers. Will he save our species from extinction or be the sole survivor, lost forever in space?

The first book in the Galaxy on Fire series is Embers:

Jon was the first astronaut to download to an android host to find the population of doomed Earth a new home. But that was so long time ago. He is now literally lost in time. The far flung future is dominated by an unstoppable species, the Adamant. They have conquered most of the galaxy. No civilization has successfully resisted them. Brutally efficient, selflessly devoted to their empire, and callous to all other forms of life, the Adamant have advanced without boundaries. But they are about to run into a major problem. One very pissed off Jon Ryan stands in their way. He escapes their prison ship, rescues two teenage shapeshifters, and intends to protect them at all costs.

Jon, Mirraya, and Slapgren race across the galaxy always just one step ahead of disaster. But the combined evil forces that pursue them tear the trio apart. The teens must fend on their own in a hostile universe. All the while, Jon runs for his life, hoping against all hope to locate the teens. In a galaxy burning with war, genocide, and hidden magic, can Jon Ryan pull off one more miracle?

11
Short story I read - Outsiders enter hedonistic utopian society where citizens live forever by transferring bodies, havoc ensues
12
Help identify a modern fantasy short story
12
A book about teenagers isolated in a school with robot teachers and no adults
7
A story about a guy who helped humanity by being held in a prison
14
Sci-Fi book with a ramshackle shed being drawn towards the end of the universe or into the future; turns out to be a human perception of something
10
1980s (or earlier) book where people live a long time but they have short memories
14
Post-human Earth with intelligent animals. In one scene, bear rubs against crystal pylon to leech energy from structure holding stored human minds