Did Captain Terrell and Cdr. Chekov have their phasers when they encountered Khan and his group outside of the Botany Bay?

In the movie Star Trek II: The Wrath of Khan, did Captain Terrell and Commander Chekov have their phasers when they encountered Khan and his group outside of the Botany Bay?

Yes and no (but mostly no).

The original screenplay doesn't mention them having any weapons when they're confronted by Khan's men, nor do they appear to have any in the film itself.

A RING OF SUITED FIGURES has them surrounded. 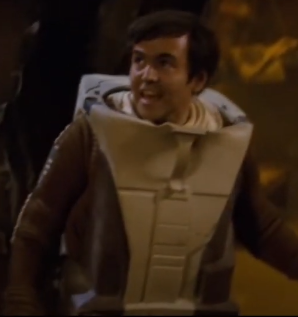 That being said, the official novelisation does mentions Chekov having a phaser. The ring of people had the drop on them and they were swiftly disarmed.

"Beam us up!" Chekov cried into his transmitter.

As he grabbed at his phaser, one of the suited figures lunged forward, disarmed him, and knocked him back into the airlock.

Not the answer you're looking for? Browse other questions tagged star-trek the-wrath-of-khan or ask your own question.