Book: A guy who gets trapped in fantasy world, gets married, finds happiness but gets flung back into his own world and tries to find a way back?

I think he gets married to a human-like elf person. I just remember feeling a sense of melancholy reading it. The guy gets put back into his own reality, the modern world and spends the rest of the time trying to find a way back into this other reality/dimension where he has a wife.

This reminds me of the Magic Kingdom of Landover books by Terry Brooks from the late 80s. Ben Holiday is a guy from this world who crosses to the Magic Kingdom, where he marries a dryad, Willow who sometimes turns into a tree.

In subsequent books in the series Ben returns to this world several times, but I don't have the books to hand to see which one matches the OP's post most closely.

There is a movie called John Carter, which is based on the book A Princess of Mars (which can be obtained from Project Gutenberg here). 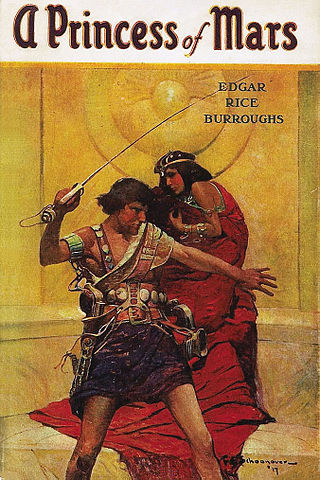 The main character, John Carter, is accidentally teleported to Mars and for a large portion of the book, does not know how to return to Earth. The bulk of the story is a classic fantasy adventure, with strange "men" (the tall, four-armed Tharks) and a princess that needs saving, with whom the hero ultimately falls in love. The world has an eclectic mix of technology, with flying ships and energy weapons alongside swords, resulting in a very classic "medieval fantasy" feel. Of particular note is that John Carter's body, adapted for Earth gravity, means that he is stronger than the natives and capable of jumping quite high and far.

At the end of the story, John Carter is sent back to Earth due to actions of the main antagonists, and spends many years trying to get back to Mars a.k.a. Barsoom and his beloved wife.

However, the titular princess is not an elf, although her people may seem elf-like compared to the Tharks and the other, antagonistic human tribe.

This sounds like Matthew Stover’s Heroes Die, published in 1998.

Renowned throughout the land of Ankhana as the Blade of Tyshalle, Caine has killed his share of monarchs and commoners, villains and heroes. He is relentless, unstoppable, simply the best there is at what he does.

At home on Earth, Caine is Hari Michaelson, a superstar whose adventures in Ankhana command an audience of billions. Yet he is shackled by a rigid caste society, bound to ignore the grim fact that he kills men on a far-off world for the entertainment of his own planet—and bound to keep his rage in check.

But now Michaelson has crossed the line. His estranged wife, Pallas Rill, has mysteriously disappeared in the slums of Ankhana. To save her, he must confront the greatest challenge of his life: a lethal game of cat and mouse with the most treacherous rulers of two worlds . . .

The date is off, however.

Could be The Knight by Gene Wolfe. A young boy is transported to a Norse style fantasy realm Mythgarthr, where he is turned into a man (but his thinking is still that of a confused teenager).

Going by the name Able of the High Heart, he has a love interest Disiri who is an elf woman.

I can't recall if he gets back to normal life at the end and wants to go back to Mythgarthr, or just finds a point between the two worlds where he can see his brother (my books have been in storage recently and I'm still trying to sort them out, so don't have the book close to hand).

This bears some similarity to "The Lyndesfarne Bridge" novels -- New Bridge to Lyndesfarne, Bridge at War, Death on the New Bridge, and Bridge of Stone and Magic by Trevor Hopkins.

The titular bridge goes between the northeast coast of England and another world, where the natives have some similarities to elves; the other world runs mainly on magic, where ours runs mainly on technology. At one point in the fourth novel, the protagonist of the four books is stranded at "home" in our world, and must wait to find out for certain if his lover from the other world made it across.

Edit: Oops, I just did find the publication date of the first novel: 2006. Fifteen or so years too late.

At the time of writing, there is only one known crossing between the worlds, located in North East England. The crossing appears as a long causeway and an old stone bridge to a small island - whether approached from the Lyndesfarne world or from our own. There is a considerable amount of trade between the worlds and it is clear that there are economic and political advantages to both sides.

I couldn't find a publication date for these, but I'm certain they've been out for at least fifteen years (the page linked above has a 2006 copyright notice).

This is very common, as you’ve seen. Another is Three Hearts and Three Lions, by Poul Anderson, where the hero is a Danish partisan who becomes a paladin, then returns to save a nuclear physicist from the Nazis, and the heroine is a Swanmay.

Any chance it might be one of the books in the Thomas Covenant series by Stephen R. Donaldson? There are a few, the first of which is Lord Foul's Bane (1977).

It's set in the modern day (or at least the late '70s, when it was written). The titular character is a leper who gets healed by accident when he travels to a fantasy land. Part of one of the books follows him returning to his real life and wanting to go back to the fantasy land.

He called himself Thomas Covenant the Unbeliever because he dared not believe in the strange alternate world in which he suddenly found himself.

Yet the Land tempted him. He had been sick; now he seemed better than ever before. Through no fault of his own, he had been outcast, unclean, a pariah. Now he was regarded as a reincarnation of the Land's greatest hero--Berek Halfhand--armed with the mystic power of White Gold. That power alone could protect the Lords of the Land from the ancient evil of Despiser, Lord Foul. Only...Covenant had no idea of how the power could be used!

Thus begins one of the most remarkable epic fantasies ever written...

It's been a while since I read it, and I couldn't find a lot of information online, but I think that what you described might be in Slambash Wangs of a Compo Gormer

Not the answer you're looking for? Browse other questions tagged story-identification books marriage or ask your own question.

5
Story identification: Alien Abduction, the Perfect Human, read mid 80's in Australia
13
What's the movie where this guy finds that his world is simulated and tries to find those simulating it?
2
A sci-fi/fantasy book about an author who gets sent into the world of his own books
6
Book involving dimensional travel/time travel: a modern earthman has a relationship with a medieval princess
8
Short story about an immortal being who creates human body (and falls in love?)
4
1990s fantasy novel with humans turning into elves. Main character loses a leg which regenerates
25
Book in which children escaping London get sent to an alternate reality
10
Guy tries to enter village, loses his lover, finds a shipwreck, gets into prison, finally flies away
4
90s-00s novel about a boy with a dimension hopping device