In these books, a radical underground group develops a bacteria that eats all the fuels and plastics. They release it on the world with the intention of killing most of the world's people, to arrive at a "sustainable" population of about, I think, 100 million. Civilization comes to a halt. Any technology that escapes the "plague," as I think it's called, has rocks thrown at it by a catapult on the moon. Steam power works. The US government falls apart and has two rival governments, one in Colorado Springs and one in Atlanta, I think. Eventually the two governments agree to disagree on how to run the former USA. There is quite a bit of intrigue and politics.

Sounds like Daybreak Zero by John Barnes. A trilogy that follows the destruction of western civilization by plastic/hydrocarbon eating bacteria and attempts to keep the federal government going. The group in Colorado Springs sends out pamphlets on how to do things like leatherworking. One of the characters was dependent on medical equipment that used plastics so there was the suspense of how long he could keep the gear working and contamination free.

There was also some weird mind-control stuff mixed in, if I remember right.

The Daybreak plague strikes, and world governments are helpless to deal with it. Industrial civilization rapidly breaks down, and tens of millions die in the U.S. alone (the global death toll measures in the billions). There is a presidential succession crisis. Just as society in the U.S. seems to start stabilizing, previously placed pure fusion weapons detonate, destroying Washington, D.C. and Chicago. This is followed by additional pure fusion weapon strikes, which are determined to be weapons that are being created on the Moon by nanotech replicators. 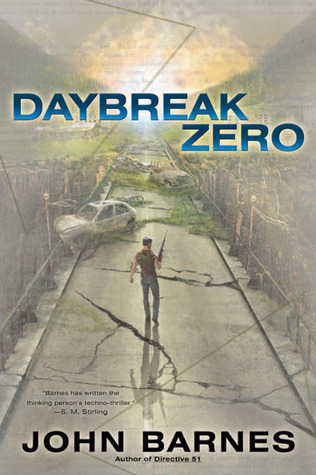 A big, near-future disaster novel straddling the border between science fiction and technothriller, likely to appeal to fans of both. Anderson and Beason (coauthors of Assemblers of Infinity, 1993) begin with a huge oil spill in San Francisco Bay. The oil company decides to deploy an octane-eating bacteria, crossbred from two naturally occurring species, but the cure turns out to be worse than the disease: While scientists who bred the new bug swear it cannot spread beyond the spill, it contaminates gasoline in the tanks of cars crossing Golden Gate Bridge during the spraying. As each of the cars gasses up, the bacteria spreads to the gas in the service station tank. Worse, the bug soon develops an appetite for petroleum byproducts, in particular plastic and other synthetics. As the elaborate web of modern technology begins to disintegrate, the characters, a varied cast from all walks of life, are thrown back on their own resources for survival. A venial Louisiana congressman suddenly inherits the presidency; an insurance agent quits her job and takes to the wilderness; ghetto families from Oakland join forces with a hippie commune near Altamont; and a scientist developing a solar power facility in the New Mexico desert becomes the hope for technology's revival.

While it is not a trilogy, could you be thinking of Timescape by Gregory Benford as per Short story featuring microbes that eat plastic and rubber, causing regression of technology? The question is more matching than the summaries I've found, with the suggestion being that the plastic shortage may actually be due to bombed oil fields.

Another, unaccepted, answer to Short story featuring microbes that eat plastic and rubber, causing regression of technology mentions Mutant 59: The Plastic Eater by Kit Pedler, which matches for a bacteria eating plastics, which is a better match for the plastic-eating bacteria and the collapse of society.

The plot is simple: a man-made bacterium starts eating plastic, all plastic, everywhere. Incidents occur around the world, but the heart of the infection is in London and during the course of the novel, central London is cordoned off by the army who erect decontamination centres at key gateways in and out.

The book is set in winter so the quick result of all this melting and exploding is the cessation of power, light and communications. The government assumes emergency powers. The army cordons off central London and sets up decontamination centres at key gateways, where citizens are stripped and deloused – all in a bid to prevent the bacterium travelling beyond central London and, potentially, around the world.

What does not match is that it's a single scientist who accidentally comes up with the bacteria while trying to solve environmental problems, not a terrorist group, and they manage to solve the problem before civilization wholly collapses.

Not the answer you're looking for? Browse other questions tagged story-identification apocalypse or ask your own question.

14
Novel that imagines a dystopia created by the disappearance of plastic
11
Short story featuring microbes that eat plastic and rubber, causing regression of technology

8
Seeking story about time slowing, couple in stasis, end of the world
8
End-of-humanity SF
5
Trilogy of books featuring featuring ice age spacefaring civilization
13
A rapture to the end of time story, kind of like "The Last Question" but not
10
Sci-Fi: Story about an astronaut and telepathic feline-like aliens
10
Novel about genetically engineered bacteria that causes hallucinations?
13
A book about anarchy and 3D printing
8
Book about a boy that enters a medieval fantasy PC computer game
18
80s era sci-fi book on time travel; college man gets to the future where telepaths are a growing minority, plants iron berries and gets rich