Where was the Shield Wall brought down?

At the end of the first Dune book, the Paul Atreides and the Fremen attack Arrakeen. They bring down part of the Shield Wall using Atomics in order to be able to ride worms to the city. I tried to find the exact location of the breach but did not find an exact location. 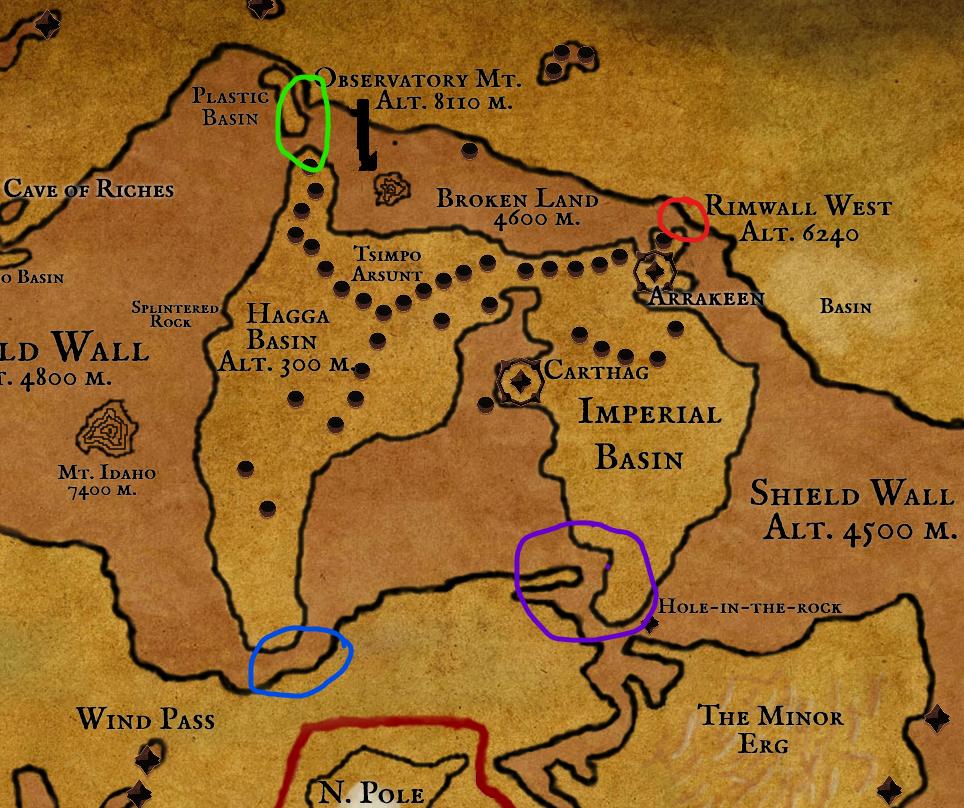 I think there are four locations that are probable as there, the Shield Wall is the thinnest. IMO, the most probable would be red. On the other hand, it's rather close to Arrakeen and with the convention on atomics, it could be risky to blow up an atomic bomb this close to Arrakeen, also considering radiation. Green would probably be less desirable, as you have to blow up to different parts of the wall.

Blue and purple are equal, far away from population (and therefore not in such a big risk of breaking the convention) but it greatly increases travel time from the breach to Arrakeen.

Paul nodded, kept his eye on the time-standard dial in front of the signalman. Presently, Paul looked at Gurney, raised a hand, returned his attention to the dial. The time counter crawled around its final circuit.

It seemed that a full second passed before they felt the ground beneath them ripple and shake. A rumbling sound was added to the storm's roar.

The Fedaykin watcher from the telescope appeared beside Paul, the telescope clutched under one arm. "The Shield Wall is breached, Muad'Dib!" he shouted. "The storm is on them and our gunners already are firing."

For the watcher to be able to observe that the gunners are firing at Arrakeen, I don't see another way than being close to red. Is my argument correct and has it ever been clearly described / shown at which location the Shield Wall was breached?

The location is specifically marked on the original version of the map (not sure at which point they changed it, but pretty sure it was still there as of the late 90's which is when my most recent copy was published.) 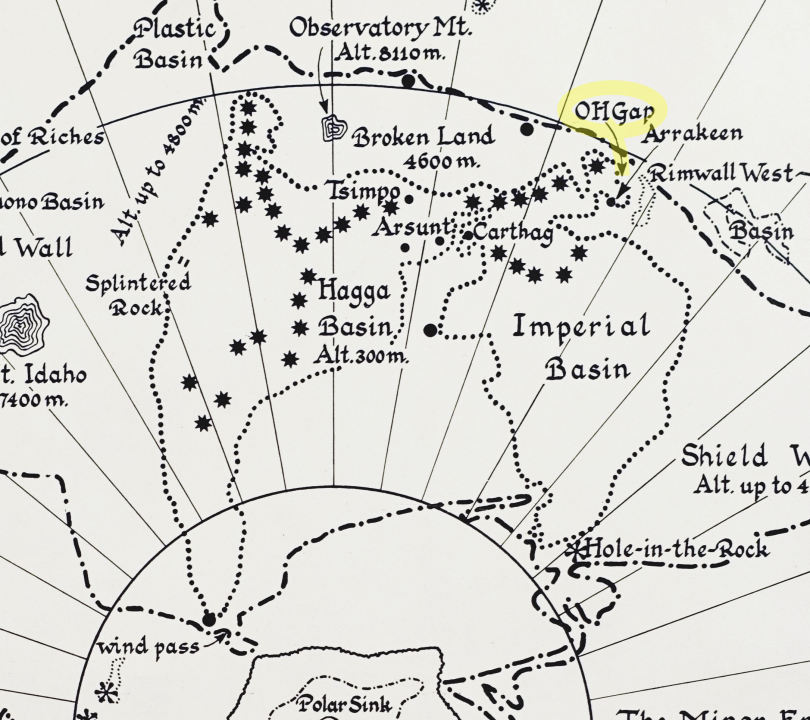 Here you'll note a location just north of Arakeen in the western rimwall marked "OH Gap"; which is described under the 'Cartographic Notes' section on the next page thusly:-

Old Gap: a crevasse in the Arrakeen Shield Wall down to 2240 m.; blasted out by Paul Muad’Dib.

Not certain why the map labels it "OH Gap" instead of "Old Gap" (possible an error that was never corrected?), but the location is about right and there's nothing else that it could apply to so far as I can see.

9
Was the first Leto II also the Kwisatz Haderach?
13
Where does the Emperor in Dune rule from?
7
What was the Atreides worldview?
7
In Dune Messiah, where were the "Tleilaxu weaknesses" in the plot against Paul
2
Was Leto really gunning for the Emperor's throne?
4
Was Paul the only Mentat in the Atreides bloodline?
6
Was the Kwisatz Haderach necessarily able to see the future?
21
Where was the missing spice harvester carryall?
6
Why were the Harkonnen risking using a lasgun to shoot down Idaho's ornithopter?
7
Is there a faction using the Lasgun / Shield reaction?