Online fiction (originally prose fiction, later had a partial webcomic adaptation) about a boy and a succubus

I know I've found this in the past, but I seem to have lost my references. I think I originally read this in early 2000, in English, online. At some point, that website went down, I found some cached copies online, and eventually found the original author (I think through associating his name with an XBox Live account) and received a dump of files from him that included all of the parts, and a few of the comic images.

The basic concept is that a young man in college wakes up one morning to a succubus who tells him something along the lines of "Good morning, I'm going to kill you now and eat your soul", and he manages to convince her to give him one last roll in the hay before killing him, whereupon she (who I think it was implied had very little actual carnal experience) decided she could get a bit of his soul at a time by having sex with him, and that she could spread out eating his soul over several months. She puts her brand on him (which shows up as a super-deformed image of her flashing a peace-sign as an embarrassing tattoo, I think on his hip) and when he attempts to escape, he finds out she's put a magical leash on him that manifests if he gets more than a certain distance from her. This results in him having to take her with him to class.

One early character introduced was one of his professors, a man with a pronounced German accent and an obsession with people being on-time. Because the demon girl makes him late that day, he expects to get in trouble, but upon seeing the demon girl (who uses some sort of magic to appear more normal), the teacher softens, which the protagonist finds very odd. Other characters I remember were several girls after the main character (the plotline moving to sort of a harem setup) included a juvenile delinquent (who I think is a prominent Judo user) who sees him as a good catch because he defeated her in combat (I think, accidentally), a cousin of his who died before the events of the story and is now stalking him as a ghost, and an angel who used to go to school with the girl (with, I think, there being a bit of a plot twist in a flashback where they started off on opposite sides, with the demon as an angel and the angel as a demon, but wound up switching places somehow).

A later plot development is that the demon girl is slowly sickening and dying, as it turns out she can't get the soul sustenance from sex that she thought she could, which leads to the main character planning to sacrifice himself for her survival, and the German teacher eventually revealing himself to be aware of the existence of demons and he's either a fallen angel or a former Nazi mystical researcher, who plans on trapping the demon girl and somehow extracting her power. I seem to remember that there was something involving a pocket watch he carried having mystical properties, maybe freezing her in place.

I think it had a happy ending, with the boy winding up with the demon girl, but I don't remember how that happened.

The demon girl had the stereotypical "succubus" setup with bat wings, horns, and a tail with a spade tip. The angels had halos and wings. I don't remember the sex scenes being all that steamy, although I think there were some descriptions of her nude body. The webcomic was a bit stiff and amateurish, and was definitely done in an anime style.

Well, that's embarrassing. I wrote a TV Tropes entry for this one several years ago. Kumiko The Demon Girl is the webfiction I was looking for. 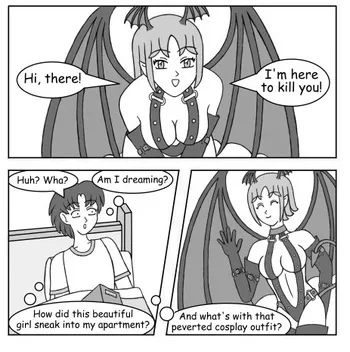 Ken Iwakami, college student, hopeless in love, and general slacker awakes to these words and finds that Kumiko, a succubus, has chosen his soul to devour.

In desperation, he claims he doesn't want to die a virgin and she agrees to his request. Shortly afterward, she finds that she kind of likes this "sex" thing, and the process thereof has allowed her to eat a small amount of his soul.

Thus, she decides to make him her property, complete with marking him and attaching a magical leash to his neck that keeps him from getting more than ten feet away from her.

Add in an angel with a history with Kumiko, a long-dead ancestor of Ken, an insanely jealous judo girl, and a Nazi physics professor, and wacky hijinks ensue.

It looks like the delinquent and the Judo girl are two separate characters, but the rest of the details match.

Tsundere: Ken winds up with two of these after him, a judoka and a biker girl, both of whom are convinced that Ken is the only person who can see past their tough exteriors.
Those Wacky Nazis: It's rumored that Dr. Josef Strauss was one of these. He's actually a Fallen Angel.

Not the answer you're looking for? Browse other questions tagged story-identification demons or ask your own question.

9
Series: Female half-demon/half-angel paranormal P.I. sends demons back to hell
7
Mid 90s fantasy novel. Main character is similar to a brownie, has a skeleton companion
5
Webcomic about a boy visited by a young demon who emerges from under his bed and loves cookies
8
Webcomic about a demon, a humanoid and an angel
5
Webcomic from around 2014-16 about demons and pacts
6
Steamy fantasy book, succubus-type character being after the "seed" of male protagonist
5
Webcomic about small red demon and human woman in fantasy world working as police officer
2
Manga with a boy whose father was murdered (but is still around), living with a demon girl with magic hair
0
Online manga about a boy accidentally summoning a demon at his school who fights people